The Italian footwear market is an enormous industry with a long tradition. Italy is among the leading footwear manufacturers in the world and the first in Europe. The country holds almost one percent of the production worldwide, making the ranking together with big shoe producers such as China, India, and Vietnam. The Italian company Geox ranks as the largest retailer, with the most shops in Itay. Other popular retailers in the country, also well-known worldwide, are Footlocker, Tod's, Deichmann, and Desigual. The footwear industry also represents an important source of employment. In 2019, this sector counted roughly 75 thousand employees in Italy.

Italian shoes are famous worldwide. Indeed, Italy exports a large amount of shoes, accounting for a value of over eight billion euros. Figures show that the export value of Italian shoes has been growing in recent years, even if the export volume decreased slightly. Leather shoes account for the highest value with an export of over 6 billion euros in 2019. In fact, the Italian leather industry represents another outstanding sector for the country: Italy is the main exporter of leather goods in the world. In terms of value, Italy heads the ranking, followed by the United States and Brazil.

Also, Italy ranks among the main global footwear importers in terms of volume. In 2019, the estimated value of shoe imports added up to over five billion euros. Chronological data show that the imports have been growing in both value and volume. Italy mainly imports from Europe and Asia. The most valuable shoes come from Switzerland: on average, a pair of Swiss shoes is imported for 126 euros.

Renowned footwear brands from Italy include Geox, Prada, Salvatore Ferragamo, Tod's, Fendi and others. In total, there are over four thousand companies in the Italian shoe industry. Generally, such brands produce not only footwear but also clothing. However, some of these brands are mainly known for their shoes. For instance, almost 90 percent of Geox revenues are generated by footwear sales. Similarly, the selling of footwear contributes to over 40 percent of Salvatore Ferragamo's revenues, whereas only a small percentage comes from the apparel sector. For Prada, the share of sales is more equally distributed: clothing and footwear account for 40 percent of company revenue.
This text provides general information. Statista assumes no liability for the information given being complete or correct. Due to varying update cycles, statistics can display more up-to-date data than referenced in the text.
P. Smith
Research expert covering apparel industry and general merchandise
Get in touch with us now
Published by P. Smith, Jan 12, 2022

Share of the leading 10 global footwear producers in 2021, by country

Number of companies in the Italian footwear industry
4k

Retailer with the largest number of stores in Italy
Geox

Leading footwear & leather retailers in Italy 2019, by number of outlets 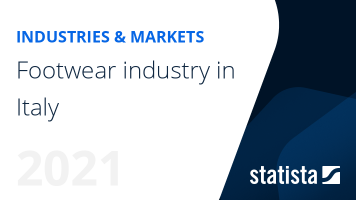 The most important key figures provide you with a compact summary of the topic of "Footwear industry in Italy" and take you straight to the corresponding statistics.