Advances in horizontal drilling and hydraulic fracturing have made the United States natural gas industry the largest in the world. As more sophisticated extraction technologies have allowed for shale gas to be culled, the United States has grown to become the world’s leading producer of natural gas. Formed over millions of years from decomposing plant and animal matter, natural gas is one of the most widely used fossil fuels today. It consists primarily of methane and other hydrocarbons.

Some of the country’s largest natural gas reservoirs are found in the Appalachian Basin and along the Gulf Coast. As of 2022, the Haynesville play, which stretches across Louisiana and Texas, had the highest number of U.S. gas rigs in operation. The play was first discovered in 2008 by Chesapeake Energy, which has remained active in the area along with other industry heavyweights such as ExxonMobil and BP. The latter company was found to be the leading natural gas producer in the U.S. based on production volume in 2021, having extracted nearly 16 billion cubic feet per day.

Due to an increase in production output and added LNG terminal capacity, U.S. exports of natural gas have tripled in the past five years. In 2021, a record 6.65 trillion cubic feet of natural gas were exported through pipelines or on tankers carrying LNG. Growth in LNG trading especially has made the U.S. the second largest natural gas exporter worldwide.

The coronavirus pandemic and Russia-Ukraine war are two recent examples of outside events with significant impact on the industry. When fuel demand fell during imposed lockdowns and reduced economic activity, specialized companies such as those operating only with unconventional extraction methods were hit particularly hard, with Chesapeake Energy, a shale pioneer, the most prominent victim. In 2020, natural gas production in the U.S. fell to 914.6 billion cubic meters, down from a peak of 930 billion cubic meters the previous year. As a result, the U.S. oil and gas extraction industry’s value added similarly declined, falling to the lowest value since 2003.

Less than two years later, U.S. upstream activity is experiencing a major boom in the wake of a global energy supply shortage that began in late 2021 and was further compounded by the Russia-Ukraine war in 2022. With many European countries now looking for an alternative to Russian-sourced gas, price benchmarks such as the Henry Hub have been on a near-constant upward trajectory. Buoyed by the supply bottlenecks, U.S. producers were able to bring in some record quarterly profits.
This text provides general information. Statista assumes no liability for the information given being complete or correct. Due to varying update cycles, statistics can display more up-to-date data than referenced in the text.
Published by Statista Research Department, Jan 31, 2023 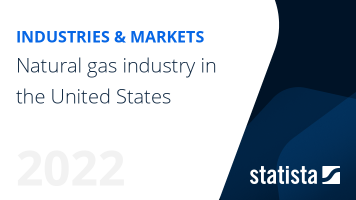 The most important key figures provide you with a compact summary of the topic of "Natural gas industry in the U.S." and take you straight to the corresponding statistics.