The English Premier League is the highest level of the professional English football league system. In February 1992, following a series of meetings attended by club representatives from Manchester United, Liverpool, Tottenham, Everton and Arsenal, a decision was made for the Football League First Division to break away from the Football League and form the English Premier League, enabling the clubs involved to capitalize on a lucrative television rights deal.

Broadcasting payments in the Premier League

During the 2020/21 season, there was a minimum equal share British broadcasting payment of approximately 31.4 million British pounds and an international broadcasting equal share payment of roughly 48.5 million British pounds. Liverpool F.C. is one of the longest uninterrupted part-takers in the Premier League and during this season,they received the third highest broadcasting payment among all clubs. In the 2020/21 season, total Liverpool F.C. revenue amounted to 550 million euros, of which only eight million Euros was derived from matchday revenue, while 308 million euros came from broadcasting revenue and 238 million euros from commercial revenue. The significant drop in match-day income is a direct result of the COVID-19 impact on the Premier League.

Since the club’s establishment in 1892, Liverpool F.C. have won nineteen Premier League titles, the most recent of which, on June 25, 2020 was their first since 1989. In addition Liverpool FC have won seven FA Cups, eight League Cups, fifteen FA Community Shields, six European Cups, three UEFA Cups, four UEFA Super Cups and one FIFA Club World Cup. These accolades cement Liverpool F.C. as one of the most successful football clubs in history. Approximately 16 percent of respondents to a survey stated that their favorite Premier League club is Liverpool F.C, with over 30 percent of respondents indicating that it is rich in tradition.
This text provides general information. Statista assumes no liability for the information given being complete or correct. Due to varying update cycles, statistics can display more up-to-date data than referenced in the text.
Published by Statista Research Department, May 27, 2022

Number of trophies won by Liverpool F.C. as of 2022 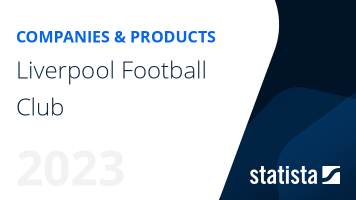 The most important key figures provide you with a compact summary of the topic of "Liverpool F.C." and take you straight to the corresponding statistics.