Published by Statista Research Department, Mar 11, 2022
Sweden is often considered one of the best countries in the world to live in due to favorable working conditions and a strong welfare system. Indeed, the Scandinavian country does have one of the highest employment rates in Europe. However, it also has one of the highest unemployment rates on the continent, showing that the situation on the Swedish labor market is more complicated than sometimes assumed. When it comes to occupations, the financial and business sector employs the highest number of people.

Another reason for Sweden's reputation as a favorable place to work and live is its high level of work-life balance. On average, Swedes work around 30 hours per week, but there are differences both between genders and age groups, with men working more than women and people between 25 and 54 years working more than the younger and the older population. However, average annual wages are lower than in several European countries, including its Nordic neighbors Iceland, Norway, and Denmark, but also Germany and the United Kingdom. However, it is higher than in southern and eastern Europe. Moreover, Sweden is known for having a high level of gender equality. Even though a gender pay gap of 11 percent exists in the Scandinavian country, it is lower than the EU average.

In 2020, the COVID-19 pandemic hit Sweden and had a significant impact on the Swedish economy and labor market. For instance, the monthly unemployment rate increased rapidly in the spring of 2020, but started to fall again in the second half of 2021. Some industries were hit particularly hard by the crisis, and there was a high number of dismissals in the wake of the crisis, particularly in the manufacturing as well as the hotel and restaurant industry. The pandemic also changed the way people work, with more people working from home after the outbreak of the virus.

In the following 6 chapters, you will quickly find the 32 most important statistics relating to "Employment in Sweden". 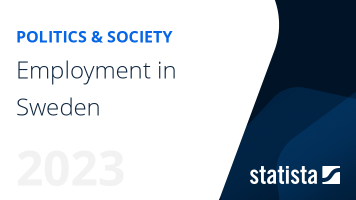 The most important key figures provide you with a compact summary of the topic of "Employment in Sweden" and take you straight to the corresponding statistics.

Employment in the UK