The graphics processing unit (GPU), a type of processor that resides in computers and other electronic devices, is a silicon-based integrated circuit that specializes in accelerating the creation and rendering of images, video, and animations. GPUs began as specialized application-specific integrated circuits (ASICs), developed to accelerate specific 3D rendering tasks. Today, GPUs have evolved to become more general-purpose processors, working in parallel to other computer components to handle a growing range of applications, notably artificial intelligence (AI) and machine learning (ML) tasks.

They are made available to consumers either as integrated or discrete components. Integrated graphics, where Intel dominates, refers to a computer where the GPU is built onto the same die as the central processing unit (CPU). The GPU is not part of the CPU in a discrete component and has a dedicated memory and power supply. They can also be referred to as a graphics add-in-board (AIB), with Nvidia and AMD completely controlling this market. In smartphones and other mobile devices, GPUs feature as part of a system-on-chip (SoC) and can render graphics.

GPUs for gaming and cryptomining

A GPU provides the fastest graphics processing, and for gamers, the GPU is a standalone card plugged into the computer via a peripheral component interconnect express (PCIe) interface. The more sophisticated the GPU, the higher the resolution, and the faster and smoother the motion. Improved framerates, or the number of frames per second the game runs at, means there is less stutter or freezing due to excessive load on the CPU, enhancing the gaming experience. The power potential of a GPU compared to a CPU has also meant they have become more useful in cryptocurrency mining due to their speed and efficiency in solving mathematical equations.
This text provides general information. Statista assumes no liability for the information given being complete or correct. Due to varying update cycles, statistics can display more up-to-date data than referenced in the text.

Thomas Alsop
Research expert covering the global hardware industry
Get in touch with us now
Published by Thomas Alsop, Nov 4, 2021 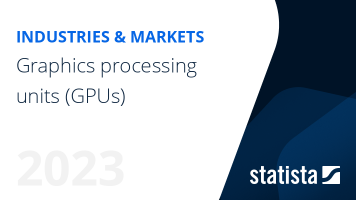 The most important key figures provide you with a compact summary of the topic of "Graphics processing units (GPUs)" and take you straight to the corresponding statistics.