According to IP addresses from people that used particular Bitcoin mining pools - or platforms that work together to mine cryptocurrencies - in 2020, the countries that mine the most Bitcoin are closely related to cheap energy prices. The cheapest electricity in the world, for instance, was three cents per kWh, while the cost of electricity in German was nearly 13 times higher. This matters for cryptomining. Essentially, mining involves verifying blocks of transactions on the blockchain. Verification is done by computers that solve logic puzzles in pursuit of a number - a "nonce". This process preferably requires "hashing" or computing power: more power potentially equals more cryptocurrency - the reward of this verification process. Mining, however, does not come cheap: Bitcoin energy consumption was the size of a small country in 2021. Mining cryptocurrencies can potentially be profitable for some, but it is a power-hungry process. Additionally, the required power can also go up.

When it comes to mining, not all cryptocurrencies are not created equal. Bitcoin has a finite, maximum supply, for instance. This supply limit is part of Bitcoin's original design and makes it different than the U.S. dollar, of which the Federal Reserve can print more of it chooses to. Bitcoin does not have this. Once the coin's maximum supply has been reached, no more mining is possible, and the market price reflects supply and demand. Ethereum, on the other hand, can be mined forever but has an annualized maximum supply. Despite rising crypto prices and growing computing power, supplies are not running out. Rather, supplies are increasing at their slowest rate yet. This is caused by a growing "mining difficulty" - or a built-in exponential growth of computing power needed to mine - and something called "halving" - mining rates going up by half every four years. Indeed, mining new Bitcoin was as hard as it has ever been in March 2021.

Growing crypto prices also led to more demand for mining equipment, or machines that can provide more hash than a normal PC. Prices of these mining rigs grew by roughly 10 percent each week in 2021 as supplies worldwide had sold out. Mining firms such as Riot Blockchain, Core Scientific and Marathon Patent Group bought several tens of thousands of machines each, which led Bitmain - a Chinese manufacturer of Bitcoin ASIC equipment - to sell out through August 2021. Production of new machines to meet the high demand also faced issues: both the 7 nanometer chips that miner manufacturers need as well as GPU units are in high demand by technology firms like AMD, Nvidia, Apple or Samsung.
This text provides general information. Statista assumes no liability for the information given being complete or correct. Due to varying update cycles, statistics can display more up-to-date data than referenced in the text.

Energy consumption of a Bitcoin (BTC, BTH) and VISA transaction as of April 2022

Maximum/current supply of 100 cryptocurrencies worldwide as of August 18, 2022

Daily Ethereum (ETH) mining profitability up until May 1, 2022 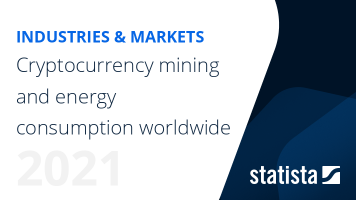 The most important key figures provide you with a compact summary of the topic of "Cryptomining" and take you straight to the corresponding statistics.