Published by
Thomas Alsop,
Nov 4, 2021
A computer is composed of components in the same way that the body is composed of organs, working together to make the body or computer function. A basic computer has several key components which include a computer case or tower, motherboard, central processing unit (CPU), graphics processing unit (GPU), random access memory (RAM), hard disk drive (HDD), or solid-state drive (SSD), as well as a power supply unit (PSU). The computer case encloses and holds all the necessary hardware required to store and process data on the computer, whilst the motherboard ensures that the hardware inside the computer can communicate with each other.
Personal computers (PCs) come in several varieties, including stationary products like workstations and desktops, as well as portable products like laptops, notebooks, netbooks, and tablets. In 2021, it is forecast that over 277 million units of notebooks and mobile workstations are to be shipped worldwide, while tablet shipments will reach 160 million units.

Of the key components, a CPU, also called a central or main processor, is responsible for processing and executing instructions that make up a computer program. The GPU, also called graphics card or video card, is a specialized electronic circuit that accelerates the creation and rendering of images, video, and animations.

Intel, AMD, and Nvidia are among the leading vendors in the market, producing GPUs that can perform fast math calculations while freeing the CPU to perform other tasks. While a CPU uses several cores that are focused on sequential processing, a GPU is created for multi-tasking – it has hundreds, even thousands, of smaller cores, and can handle thousands of threads (or instructions) simultaneously.

Computer memory refers to the physical devices which are used to store data or programs for use in a computer. Primary storage allows for the short-term storage of data: information is retained for immediate use and is directly accessible by the CPU, usually until the main device is reset or turned off. The primary memory of a computer is called RAM, with the two most used forms of modern RAM being static RAM (SRAM) and dynamic RAM (DRAM). The global DRAM market generates over 15 billion U.S. dollars each quarter, with Samsung being the largest manufacturer of DRAM in terms of revenues.

Secondary storage, either in the form of HDDs, SSDs, flash drives, or other longer-term storage devices, record and hold data indefinitely, even when the main device is unpowered. NAND flash memory is a type of non-volatile storage that does not require power to retain data.

In addition to components within the computer, peripheral devices form an important part of the computer hardware market. A computer peripheral is any external device that provides input and/or output for the computer. For example, a keyboard and mouse are input peripherals, while a PC monitor and printer are output peripherals. The hardcopy peripherals market, which includes printers and copiers, is dominated by vendors such as HP Inc., Canon, and Epson.

In the following 8 chapters, you will quickly find the 42 most important statistics relating to "Computer components". 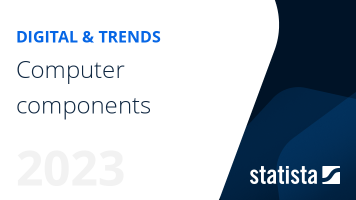 The most important key figures provide you with a compact summary of the topic of "Computer components" and take you straight to the corresponding statistics.