The United States' mining industry has a long history, and it continues to be an important and active industry to this day. The products produced through mining provide the foundation for all manufacturing, giving factories the raw materials needed to produce their goods. As such, value added by the mining industry to the U.S. domestic economy from the 12,714 active mines in the U.S. as of 2020 amounted to nearly 57 billion U.S. dollars. The most common commodities produced in the U.S. based on volume include sand and gravel, stone, and coal. Other mineral products, produced in smaller quantities, can carry higher prices.

Among those higher-priced commodities are precious metals. The United States mines hundreds of tons of gold and silver each year, as well as millions of tons of base metals such as iron ore and copper. This extraction came from the 278 active metal mines in the U.S. as of 2020. Over half of the active mines produced the tens of millions of tons of industrial sand and gravel that the U.S. produces each year, which is needed to support the massive volume of construction projects that the country undertakes.

Revenues of the leading United States' mining companies are in the billions of U.S. dollars. The largest U.S.-based firm in terms of revenue is the gold miner Newmont Mining, followed by the coal mining companies Peabody Energy Group and Arch Resources. While contributing substantial economic activity to the U.S., these are hardly the largest mining companies globally. The leading mining companies worldwide are based primarily in the UK and China. However, despite the technological advances and automation of some of the more dangerous aspects of the work, U.S. mining firms continue to provide significant domestic employment, which amounted to roughly 539,000 jobs as of 2020.

Social and environmental footprint of the U.S. mining industry

The workplace hazards associated with mining have long been a point of controversy. While the industry has embraced safer practices, there are still a steady number of mining fatalities in the U.S. each year. Similarly, as environmental regulations have become more stringent, U.S. mining companies experienced more contact with the Department of Interior and other governmental agencies. Environmental activists have had some success, however, including millions of acres of U.S. land reclaimed from the mining industry, mainly from former coal mines. This highlights the potential for environmental issues to arise due to its impact on the environment.
This text provides general information. Statista assumes no liability for the information given being complete or correct. Due to varying update cycles, statistics can display more up-to-date data than referenced in the text.

U.S. consumption of minerals per capita by type 2021 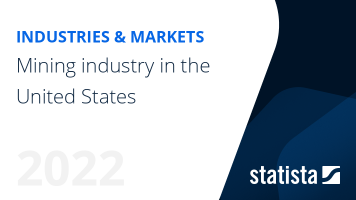 Go to report Mining industry in the U.S.
Top Seller

The most important key figures provide you with a compact summary of the topic of "Mining in the United States" and take you straight to the corresponding statistics.