Published by Statista Research Department, Jun 9, 2022
The West Ham United Football Club was originally founded as the Thames Ironworks Football Club in 1895 before it reformed as West Ham United only five years later. The club plays in the Premier League, which is not only the most successful football league, but also the most successful sports league worldwide. According to the Soccer Power Index, West Ham is considered the 37th best football team worldwide. They have won the FA Cup a total of three times, the last time being in 1980.
West Ham has an enterprise value of approximately 476 million British pounds or 561 million euros. With a total revenue of roughly 221.5 million euros in 2021 season, West Ham United is among the most successful football teams in Europe. Since 2015, Betway is the official jersey kit sponsor of Westham and among football fans, most perceive them as ambitious, dynamic and progressive. This is the seventh highest jersey kit main sponsorship in the Premier League at an annual 10 million British pounds, the highest being Etihad and Manchester Cityd at an annual 67.5 million British pounds.

When it comes to stadium attendance, West Ham places third highest in the Premier League, with an average of 57,915 attendees per game during the 2021/22 season. Season ticket prices range from 299 British pounds as the cheapest season ticket for West Ham, as well as in the Premier League overall, to 1025 British pounds as the most expensive season ticket. It was estimated that due to the coronavirus (COVID-19) pandemic, West Ham United would have a total revenue loss of 37.4 million British pounds for the season. The 2020/21 revenue did show an absence of match-day revenue.

In the following 4 chapters, you will quickly find the 22 most important statistics relating to "West Ham United". 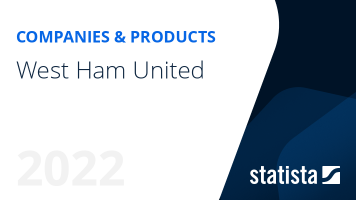 The most important key figures provide you with a compact summary of the topic of "West Ham United" and take you straight to the corresponding statistics.