Even though reading is not a particularly popular activity in Hungary, book sales revenue reached 56 million forints as of 2021, and over 17 thousand book titles were published in 2020. However, according to a forecast, the user number of the physical books market is expected to decrease to 1.38 million by 2027 from 1.77 million recorded in 2022.

The Hungarian publishing industry generated approximately 157 million U.S. dollars’ worth of revenue from sales and licenses in 2021, representing a decrease of 13 percent compared to the year before. The trade sector accounted for the majority of the profit, while educational books contributed with only nine million U.S. dollars to the industry revenue. Prior to 2013, the school book market used to be highly competitive in Hungary. However, the shool system, as well as the educational book market was restructured through a series of measures introduced during 2011 and 2012. One of the actions taken by the government was the launching of the School Book Supplier, a state-owned distribution entity that became the only available channel for acquiring school books, which shortly drove educational book publishers out of the Hungarian market.

The future of digital books

Over the past two decades, e-books and e-readers became a lucrative industry in many parts of the world. However, the e-book market is not as developed in Hungary as in some other parts of Europe since in 2022, there were only 0.6 million e-book users in the country with a population of approximately ten million. In the same year, revenue from e-book sales amounted to 2.58 million U.S. dollars and is expected to follow an increasing trend until 2026. Even though reading is on the decline in Hungary, as fewer and fewer people read books each year, the digital segment still has the potential to develop and reshape Hungarians’ book consumption habits.
This text provides general information. Statista assumes no liability for the information given being complete or correct. Due to varying update cycles, statistics can display more up-to-date data than referenced in the text.
Published by Flora Medve, Nov 28, 2022

Number of books and booklets published in Hungary 2010-2021

Number of books and booklets published in Hungary 2010-2021

Share of book sales revenue in Hungary 2021, by category 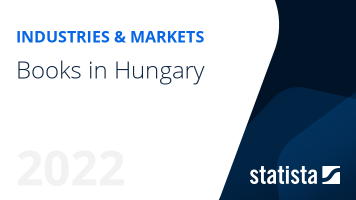 The most important key figures provide you with a compact summary of the topic of "Books in Hungary" and take you straight to the corresponding statistics.