Radio is an undoubtedly powerful media channel in Hungary, serving as a source of information and entertainment for over half of the country’s population every day. Hungarian radio stations owe their popularity to the wide variety of programs and content that make them appealing to different audience groups. By 2025, radio broadcasting revenue in Hungary is projected to reach 37 million U.S. dollars.
In 2022, Hungarians listened to the radio on average four hours a day, which is a very high figure, considering that the numbers had been calculated including data on non-radio listeners. In the same year, of the numerous established radio stations, the commercial Retro Rádió was Hungarians’ favorite, with a daily reach of nearly 1.8 million people, even though several other stations had a bigger musical repertoire. It was followed by Rádió 1, reaching almost 1.2 million listeners on a daily basis. When it comes to community radio stations, Jazzy Rádió had the biggest reach totaling 52 thousand listeners in 2022.

In addition to traditional radio stations, online radios are also gaining popularity in Hungary. According to the results of a survey conducted in 2021, the majority of internet users listened to online radios, with 17 percent of the respondents doing so every day. As of the fourth quarter of 2021, online radio usage rate was highest among Hungarians between the ages of 40 to 49 years old, measuring at 48 percent while less than 20 percent of the population aged between 15 to 19 years old listened to internet radios. At the same time, online radio usage was slightly more common among Hungarian men than women.

The coronavirus (COVID-19) outbreak of 2020 brought changes in many people's media consumption habits. As the findings of a survey pointed out, nearly 40 percent of Hungarians started listening to more radio news programs following the outbreak of the pandemic. Another change brought about by the coronavirus (COVID-19) pandemic was the increasing share of people listening to the radio at home, peaking at 79 percent of the population in the second quarter of 2020.
This text provides general information. Statista assumes no liability for the information given being complete or correct. Due to varying update cycles, statistics can display more up-to-date data than referenced in the text.
Published by Flora Medve, Oct 6, 2022

Most popular radio stations in Hungary 2022, by daily reach

Most popular radio stations in Hungary 2022, by daily reach

Average time spent listening to the radio in Hungary 2022, by weekday 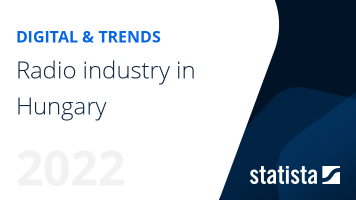 The most important key figures provide you with a compact summary of the topic of "Radio industry in Hungary" and take you straight to the corresponding statistics.