The average wage in Italy is around 30 thousand euros, ranking in the middle among European countries. Nevertheless, there are substantial differences among salaries in Italy, regarding various aspects. Some of the most relevant to take into consideration are regional and gender-based differences. More specifically, salaries in the northern and central regions are significantly higher compared to those in the south. In Lombardy, for instance, the annual gross salary is higher than in Basilicata by some seven thousand euros. A look at the wages in Italian regions shows that all southern regions rank quite low, having salaries under the European average. Factors like high unemployment rates and lower life costs in some southern regions might explain such different figures. Also, such disparities could depict a much more complicated picture of the country. This picture is revealed, among others, in the economic gap between the northern and southern regions, which has complex historical roots.
The pay gap is one of the major indicators to determine the level of gender inequality of a given society. Despite a reduction in the differences between male and female wages, gender pay gap in Italy is still an issue. Overall, the gender pay gap nationwide is about 11 percent a year in favor of men. Different sectors registered various levels of pay gaps. For instance, banking and financial services and the insurance industry have some of the largest pay gaps, with disparities on average up to 28 percent in favor of men. Nonetheless, in a few fields the gap is in favor of women, like in the construction industry. In some other sectors, the difference between the salaries is very slight or equal, for instance, in the metallurgy and steel industry. Another factor revealing the poor inclusion of women in the job market in Italy is the unemployment rate. The unemployment rate is higher among females than among males across all Italian regions. Some southern regions record the highest levels of unemployment for both males and females. However, one northern region, Liguria, registered the greatest gap between genders in terms of unemployment, with a percentage difference of 4.9 points.

Employee opinions on earnings do not depict a particularly happy image. A recent report published in 2020 analyzed salary satisfaction providing results broken down by gender. The average satisfaction of both genders is overall relatively low. However, males' average satisfaction with their salary is generally higher for all aspects taken into account by the survey. The highest degree of satisfaction attributed by the respondents is only 4.9 out of ten, which was average male employee satisfaction with their firms' transparency. Similarly, when asked about the conditions under which they would accept a salary reduction, the largest share of employees (some 30 percent) did not point out any condition: they would not accept a cut in their wage for any benefits. On the contrary, a salary reduction might mean an investment in professional development for many employees. Some of the possible conditions indicated by the employees are a training program which would bring a wage increase later on, a company bonus based on individual goals, or some services to increase work-life balance.
This text provides general information. Statista assumes no liability for the information given being complete or correct. Due to varying update cycles, statistics can display more up-to-date data than referenced in the text.
Published by Statista Research Department, Mar 16, 2021 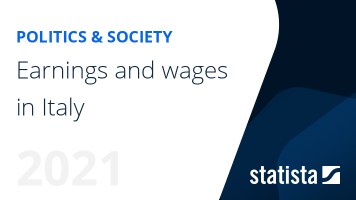 Go to report Earnings and wages in Italy
Top Seller

The most important key figures provide you with a compact summary of the topic of "Earnings and wages in Italy" and take you straight to the corresponding statistics.