Buried beneath the surface of Africa is a wealth of hugely valuable and extractable natural resources, making its mining industry one of the most important in the world. Africa is a major producer of many key mineral commodities, with bountiful reserves of metals and minerals such as gold, diamond, cobalt, bauxite, iron ore, coal, and copper across the continent. Some of the major mining countries in Africa are Democratic Republic of Congo (DRC), South Africa, Namibia, and Zimbabwe.
It is estimated that Africa houses roughly 30 percent of the known global mineral reserves, and these desirable commodities have been extracted, and often exploited, for centuries. The continent remains hugely attractive for foreign investment, especially China, where its outward FDI stock in Africa’s mining industry totaled more than 8.9 billion U.S. dollars in 2020. As a major manufacturer of electronics, China’s demand for raw materials is high.

Most electrical products we use today are reliant on a number of different minerals, and many of these can be found in Africa, including as tungsten, gold, tin, and cobalt. Cobalt is primarily used in the production of lithium batteries and is often a by-product of the copper nickel mining industries. Roughly half of global cobalt reserves can be found in DR Congo’s copper belt, and in 2021 the country’s cobalt production totaled an estimated 120,000 metric tons.

Tantalum is another mineral used in electronic equipment. Tantalum capacitors are used in products such as mobile phones and laptops, as well as automotive electronics applications. DR Congo is the largest producer of tantalum worldwide, however it is a controversial commodity.
Whilst these commodities are important to everyday life, they have often been used to fund bloody conflicts and have thus earned the name “conflict minerals”, much like “blood diamonds”.

Precious metals and gems in Africa

Two of the most profitable minerals produced in Africa are gold and diamonds. There are a number of major diamond producing countries across Africa such as South Africa and Botswana. However, the largest producer is DR Congo, where in 2020, diamond mine production totaled an estimated 12.7 million carats. This made DR Congo one of the five largest diamond producers in the world. Africa also holds the majority of the world’s platinum reserves, specifically in South Africa, which has platinum reserves of 63,000 metric tons. In 2021, South Africa’s estimated production of platinum totaled 130 metric tons.
This text provides general information. Statista assumes no liability for the information given being complete or correct. Due to varying update cycles, statistics can display more up-to-date data than referenced in the text.
Doris Dokua Sasu
Research Expert covering primarily society and agricultural topics for Africa, particularly Ghana and Nigeria
Get in touch with us now
Published by Doris Dokua Sasu, Sep 8, 2022 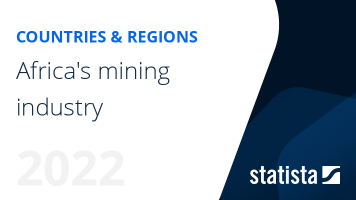 The most important key figures provide you with a compact summary of the topic of "Mining industry in Africa" and take you straight to the corresponding statistics.