Made in France - statistics & facts

Published by
Tugba Sabanoglu,
Dec 15, 2021
In 2012, Arnaud Montebourg (Minister of the Economy at the time), was wearing a sailor top from the French brand Armor Lux on the cover of the newspaper Le Parisien, to promote French manufacturing and know-how. With France's annual trade deficit reaching more than 80 billion euros, the development of the local economy indeed represents a major issue. Challenges related to the preservation and development of French production seem to have multiplied in recent years, and the popularity of Made in France continues its progression.

What does French production mean?

The notion of origin can be complex, insofar as a finished product results from an aggregate of several components: raw materials, material assembling, finishing, packaging, to name a few. Yet, with the relocation of production to countries with low costs and the development of the international division of labor, it seems difficult to establish a single origin for a complex industrial product. This is the reason why people refer to "manufactured", "assembled", or "packaged" in France. According to French Customs, in order for the label "made in France" to be affixed to a product, a specific percentage of its added value must have been produced in France.

Made in France as a strategic commercial asset

Being able to display this label is important for French companies, since for consumers, it is often associated with quality, preservation of national know-how, or reduced environmental impact. Moreover, an increasing number of French people are willing to spend more on products knowing that they were produced in France. In 2020, nearly one person in ten was even ready to pay over ten percent. Ownership of an appellation of origin could also be a powerful commercial asset, since information about the origin of goods production is still considered insufficient by most of the population. Product traceability was an incentive for a quarter of the French in 2018.

Implications of the coronavirus (COVID-19) and containment on consumption patterns

The current health crisis seems to have reinforced attention to these issues. In April 2020, most of the French population considered that this crisis was proof of the need to change consumption habits for more sustainable ones. 85 percent of people believed that the lockdown had increased the visibility of positive effects on the environment due to consuming products from local and short-distance channels. Thus, most of the population reported wanting to pay more attention to the local origin of products when the containment measures would be lifted. Furthermore, the share of French people whose purchases are motivated by the French location of production has increased substantially in recent years, reaching 75 percent in 2020.
Consumers' willingness to consume French products during containment often resulted from a conscious and active initiative, as it was a lever of solidarity with French producers who suffered because of the crisis, and support for the national economy.

In the following 5 chapters, you will quickly find the 37 most important statistics relating to "Made in France". 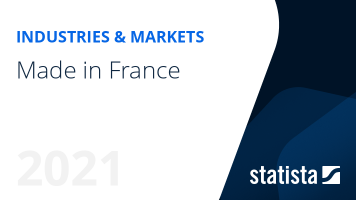 Go to report Made in France
Top Seller

The most important key figures provide you with a compact summary of the topic of "Made in France" and take you straight to the corresponding statistics.

Corporate social responsibility in the luxury industry in France