Published by
Eloise Trenda,
Jan 24, 2022
Originally from the Americas, the tobacco plant was likely used ages ago by natives in religious ceremonies or medical treatments. In the modern era, social tobacco usage has turned into a global market of more than one billion smokers. Each year, over 3.5 million hectares of tobacco are harvested around the world. Although several non-American countries rank among today’s top global tobacco producers, Brazil, Argentina, and the United States still hold relevant positions on the list.

Mexico’s role as a regional player

As one of the leading Latin American tobacco producers, Mexico’s annual tobacco production reached nearly 17 thousand tons in 2019. That same year, the harvest area was estimated at approximately seven thousand hectares —roughly the total agricultural area of the British Virgin Islands. Consequently, the North American country has become a major player in the region’s international trade, exporting more than 250 million U.S. dollars of the product.

However, like many other industries worldwide, the Mexican tobacco manufacturing was severely hit by the COVID-19 pandemic. The production of tobacco in the country had shrunk from nearly 17.5 billion Mexican pesos in 2019 to just over 11.3 billion by late 2020, which is around the total value recorded five years prior. The state of Nayarit, located between Sinaloa and Jalisco on the Pacific coast, is likely to be the most affected by this crisis since it accounts for 80 percent of the total area planted with tobacco in Mexico.

Smoking’s loss of reputation in Mexico

With the growing awareness on the dangers of smoking and the additional health risks posed by the coronavirus pandemic, the consumption of cigarettes in Mexico dropped in 2020 as well. That year, smokers in the country consumed on average one pack of cigarettes less per week than they had the year earlier. The decrease in tobacco consumption among the Mexican population can, however, be observed at least since 2010. Between that year and 2019, the smoking prevalence in the North American country went down by more than three percentage points — a trend that is expected to continue in the following years. By the mid-2020s, it is namely anticipated that just roughly 12.3 percent of the Mexican population will be active smokers.

The Mexican government has additionally taken specific measures to discourage the consumption of tobacco substitutes. In 2020, President Andrés Manuel López Obrador signed an executive order, which banned imports of electronic cigarettes into Mexican territory. This action follows the direction marked by the General Law for Tobacco Control (Ley General para el Control del Tabaco) issued in 2008, which already prohibited the commerce of these products in the country.

In the following 5 chapters, you will quickly find the 25 most important statistics relating to "Tobacco industry in Mexico". 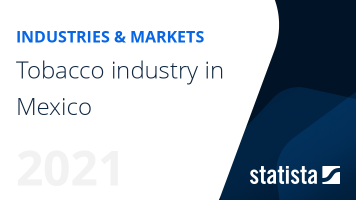 The most important key figures provide you with a compact summary of the topic of "Tobacco industry in Mexico" and take you straight to the corresponding statistics.

Tobacco Products in the U.S.