Since the opening of the first supermarket in 1958, the popularity and performance of French supermarkets and hypermarkets has not declined. In 2019, this channel accounted for almost two thirds of the food distribution market, and for more than 18 percent of non-food retail. The national success of French hypermarkets and supermarkets has also been exported abroad, making it common to come across Carrefour, Auchan or Casino stores when visiting Asia or Latin America.

In 2019, there were about 2,300 hypermarkets and almost 6,000 supermarkets in France. These large and medium surfaces refer to wide, enclosed and secure spaces with the means to encourage consumption.  One of their definining characteristics is that they operate with a self-service system, the principle of which is to give the appearance of free choice to consumers, without them having to go through the merchant as an intermediary. Products are also pre-packaged, baskets are made available to customers, and price displays are visible.
In fact, price is one of the main incentives of hypermarkets and supermarkets. The large volumes handled in these stores indeed allow the practice of more attractive selling prices while maintaining the net operating margin. Thus, buying a kilo of cheese, for example, costs 9.70 euros in supermarkets and hypermarkets, compared to nearly double in cheese shops.

Supermarkets and hypermarkets attendance affected by the health crisis

Low prices therefore make hypermarkets and supermarkets an attractive place of purchase, usually much more frequented than other types of smaller stores. However, attendance has to some extent been undermined by the coronavirus (COVID-19) epidemic and the restrictive measures implemented to tackle it. In September 2020, more than one third of the French had planned to stop or limit the frequency of their visits to supermarkets and hypermarkets. In addition, nearly half of the population had reduced their spending in physical stores during containment.
Moreover, the crisis has led some consumers to turn away from superstores in favor of alternative channels. France's economic situation was strongly affected by the crisis, and many people were willing to support their country. To this end, most of the population was convinced of the necessity to consume French products, as favoring Made in France goods is a way to show solidarity with producers, for whom the economic impact of the epidemic have been significant. Yet, the shelves of hypermarkets and supermarkets tend to contain only a limited share of products made in France, while on the other hand, local stores - whose importance increased during containment - provide opportunities for local producers. Made in France therefore represents an important challenge for large and medium-sized retailers.
This text provides general information. Statista assumes no liability for the information given being complete or correct. Due to varying update cycles, statistics can display more up-to-date data than referenced in the text.

Number of sales outlets in France 2010-2019, by distribution channel

Most visited supermarket chains in France 2020

Most visited supermarket chains in France 2020

Evolution of consumer goods sales in value in France 2020-2021, by retail channel 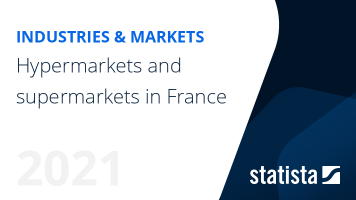 Go to report Hypermarkets and supermarkets in France
Top Seller

The most important key figures provide you with a compact summary of the topic of "Hypermarkets and supermarkets in France " and take you straight to the corresponding statistics.