The COVID-19 pandemic seems to reveal and accelerate transformations needed in the distribution sector, many of which are already in gestation. Containment measures have led to the closure of several retail networks, online sales have intensified, creating new challenges for delivery services, and businesses that were able to remain open have had to adapt.

As essential components of the market economy, distribution channels enable the sale of goods to end consumers. A panorama of food retailers shows that France has nearly 7,000 convenience stores, compared to less than 2,500 hypermarkets. Nevertheless, the hypermarket retail space is much larger. The sales area, the large shelves and the variety of products of hyper and supermarkets explain their success since the opening of the first one in 1958. The prices are lower than in small convenience stores, and the location on the outskirts of towns makes them easily accessible to non-urban consumers.
On the strength of their national success, French retailers have gone international, like the Carrefour group. In 1969, Carrefour set up shop in Belgium and then spread throughout the world. In 2019, it counted more than 12,000 retailers worldwide.

Despite the benefits of hypermarkets and supermarkets, consumers sometimes prefer other types of channels, depending on the products purchased. In 2019, over half of consumer spending on fruit and vegetables took place in hypermarkets and supermarkets, compared to about 40 percent spent on organic fruit and vegetables. Similarly, although a large majority of consumers buy cheese in supermarkets, specialty stores and markets are two popular alternative channels.
This can result from an attachment to convenience stores: the French appreciate their friendly atmosphere, their reasonable size, and for the most part associate them with quality and know-how. Moreover, they have proven to be indispensable since the beginning of the crisis and contribute, for most people, to maintaining social bonds. The enthusiasm for these alternative circuits can also be explained by a growing interest in local and responsible consumption, the already fast development of which has accelerated with the health crisis.

Drive services on the rise

Since the beginning of the containment period, consumer habits have changed profoundly, and physical stores have seen their traffic drop drastically, while online shopping and Drive services have exploded. In 2020, there were more than 5,000 drive-equipped general retailers, and the sale of products via this service had generated a turnover of more than two billion euros, an increase on 2019.
This text provides general information. Statista assumes no liability for the information given being complete or correct. Due to varying update cycles, statistics can display more up-to-date data than referenced in the text.
Tugba Sabanoglu
Research lead covering Non-food CG & Retail
Get in touch with us now
Published by Tugba Sabanoglu, Dec 15, 2021

Leading hypermarkets and supermarkets in France 2019, by turnover 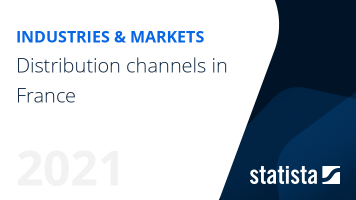 The most important key figures provide you with a compact summary of the topic of "Retail channels in France " and take you straight to the corresponding statistics.