Published by Statista Research Department, Oct 18, 2022
A credit union is a not-for-profit financial institution owned and controlled by its members. It works in many ways like a bank by providing loans and holding deposits of customers, but members of credit unions are attracted to the generally lower fees, higher interest rates, and the ability to influence the organization. Historically, credit unions were not open to everyone, but rather limited to a certain group of people, such as employees of a company, a state department in a county, or a certain industry for example, but these restrictions loosened in more recent years and membership became available to larger groups of people. While the number of credit unions in the United States (U.S.) decreased, the number of members grew steadily during the last years and reached over 132 million in the first half of 2022.

Which is the largest credit union in the United States?

There are over 4,800 credit unions in the U.S. The largest one among them is Navy Federal Credit Union, which not only has the highest amount of total assets, but also the highest number of members, and customer deposits. Navy Federal was founded in 1933 as the credit union for the employees of the Navy Department of the District of Columbia. Today, the credit union is open to all employees of all branches of the military, veterans, and Department of Defense employees as well as their family members. The leading credit union's total assets grew continuously and reached 153 billion U.S. dollars in 2021.

The size of U.S. credit unions

In the following 5 chapters, you will quickly find the 23 most important statistics relating to "Credit unions in the United States". 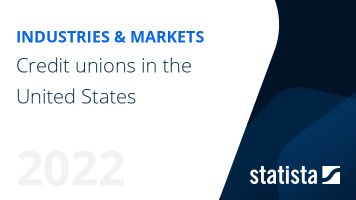 The most important key figures provide you with a compact summary of the topic of "Credit unions in the United States" and take you straight to the corresponding statistics.