Published by
Sanyukta Kanwal,
Jun 1, 2022
The wake of the COVID-19 pandemic witnessed a global paradigm shift in consumer behavior from a materialistic to a more utility based one. From a marketing point of view, specifically relative to the Indian consumer sentiment, a buying attitude from a formerly avaricious one, to one that tends toward ‘buying what is solely required’ has been evident.
The economy and public health issues of a country are not mutually exclusive. On the contrary, economic factors are intricately linked with public health measures, particularly during the state of a lockdown that maybe instituted by the government of country as a security measure. The most apparent and inevitable consequence of this has been a change in the market dynamics which can predominantly be attributed to an unstable economy. While consumers are the driving forces behind market competition and economic development, the current state of economic instability across the nation has engendered a transformation in consumer behavior. For instance, figures indicate that people are spending less of their income on items that are socially perceived as ‘nice-to-have’ such as clothing, jewelry, make-up, games and electronics.

In addition, survey results showed that edible products have witnessed a higher demand as opposed to non-edible products that include, but are not limited to, homecare products, cosmetics and personal care products. Further, another survey result indicated that over three-fourth of the population strongly agreed to spend their income more cautiously while cutting back on purchases. Studies indicated that the younger consumer groups with lower income exhibited a higher tendency to minimize their spending, while the older and higher income groups reflected a likelihood of maintaining or even increasing their spending during the pandemic.

While customer behavior dictates market dynamics, an understanding of the lives of the consumer is key to ensuring market viability of products and services. With close to no mobility and only a connection to the internet and the use of digital media, the post-lockdown phases have prompted people to engage with family and focus on their health and wellbeing. The key drivers for the use of digital platforms such as those relative to digital health (7140) other digital communities including the use of online education apps has been the result of extensive internet coverage and mobile phone penetration in India. The phases during and the near aftermath of the lockdown affected several Indians on a mental level. High stress levels compounded with a lack of movement and unhealthy eating habits including eating food from outside, took a toll on the wellbeing of a majority of the population.

However, a surge in focusing on one’s health while socializing with family members and relatives together with precautions such as social distancing and wearing masks was observed more recently. This has brought about a positive impact on the emotional wellbeing of society amid the pandemic. While public opinion alleges an optimistic outlook on the revival of the Indian economy, de facto, the status quo of the number of infected cases per day has grown more critical in certain Indian states with the reintroduction of curfews in place, and a scenario that is ostensibly far from returning to a state of normalcy anytime soon.

In the following 8 chapters, you will quickly find the 39 most important statistics relating to "Coronavirus (COVID-19) - consumer sentiment and wellbeing in India". 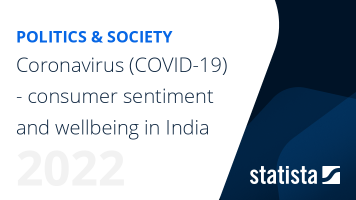 The most important key figures provide you with a compact summary of the topic of "Coronavirus (COVID-19) - consumer sentiment and wellbeing in India" and take you straight to the corresponding statistics.

Coronavirus (COVID-19): impact on holiday shopping in the U.S.

Coronavirus (COVID-19) impact on apparel and textiles in Europe

Coronavirus (COVID-19): impact on staycations in the UK

Coronavirus (COVID-19): impact on staycations in the U.S.

Coronavirus (COVID-19): impact on e-commerce in the U.S.