Impact of COVID-19 on the global financial markets - statistics & facts

Published by Statista Research Department, Nov 22, 2022
Although the lowest point of the COVID-19 financial crash occurred during March 2020 for all major stock markets, the subsequent recovery has been uneven. While some markets (notably in the U.S.) rebounded to reach record highs by the end of 2020, others (such as in the U.K.) remain below their pre-coronavirus peak. Other types of financial markets have also seen variable pandemic-related developments over 2020. For example, government bond yields plummeted with the onset of the pandemic as investors sought a safe haven for their funds. However, 10-year bond yields in the U.S. rose more quickly than in Germany over 2020, indicating investors have more confidence in U.S. economic growth than German. 2020 also saw varying returns within commodity markets, with precious metals outperforming U.S. equities, even though overall commodity prices generated negative returns.

Three factors related to governments’ responses to the pandemic influenced the uneven recovery of financial markets: differing COVID-19 case rates among countries; coronavirus vaccination rates, and differing levels of fiscal stimulus spending. Each of these three factors likely played a role in the speed of recovery, however it is difficult to isolate the exact influence of each factor as countries generally show a difference across more than one variable. For example, despite similar vaccination rates, the quicker recovery of German financial markets than French was likely influenced by both Germany’s lower case rates, and higher fiscal spending. Similarly, U.S. markets recovered faster than Germany’s, despite the former’s higher case rates and proportionally lower fiscal stimulus. This cannot simply be attributed to the U.S.’s higher vaccination rate though: initial U.S. stimulus spending was specifically targeted at capital; meanwhile U.K. financial markets remain below pre-corona levels, despite having one of highest vaccination rates (although this is likely also affected by Brexit).

Effect of COVID-19 on different industries

Another other important factor in the uneven post-corona recovery of financial markets is the question of what types of companies operate in which markets. It is telling that the NASDAQ – which is comprised largely of companies in the technology sector - recovered more quickly than other stock exchanges. The NASDAQ is home to many of the fastest growing companies in 2020, with many of these companies (such as Amazon and PayPal) being beneficiaries of the growth in online retailing precipitated by lockdowns. Conversely, companies which lost the most value over 2020 tended to operate in more traditional industries – notably energy and tourism. This is not surprising given the reduction in tourism and commuting during the pandemic. Accordingly, financial markets with a high concentration of shares for companies benefiting from the pandemic recovered more quickly than more diversified, traditional markets.

In the following 7 chapters, you will quickly find the 46 most important statistics relating to "Impact of COVID-19 on the global financial markets". 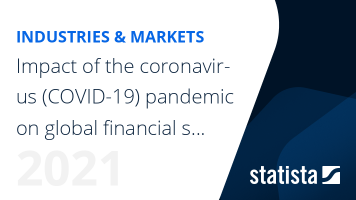 The most important key figures provide you with a compact summary of the topic of "Impact of COVID-19 on the global financial markets" and take you straight to the corresponding statistics.