IT industry in Japan - statistics and facts

Published by Statista Research Department, Aug 16, 2022
Japan is home to a large information technology (IT) industry. The software industry alone accounted for sales of almost 16.7 trillion Japanese yen as of 2020. During the same year, the data processing and information service industry generated a sales value of close to eight trillion yen. Despite these figures and the country’s reputation as one of the world’s most technologically advanced nations, both the public sector as well as parts of the economy have been considered comparatively slow when it comes to the adoption of digital technologies. Among other things, Japan was said to be lacking regarding its cybersecurity strategy, leaving its infrastructure, businesses, and citizens relatively vulnerable to cybercrimes. In recent years, however, several changes both in the public and in the private realm could be observed on many levels, which indicate that Japan is adapting more and more to the challenges posed by the digital transformation.

The Japanese IT industry has come into increasing focus as various developments in the recent years increased the demand for computer-based solutions. More and more companies, for instance, are adopting new technologies such as cloud services in order to improve business operations, which has led to a strong growth of the cloud platform services market. The IT industry is not only an important economic factor, but also instrumental in achieving what the government has termed “Society 5.0," a vision of a society in which cyberspace and the physical world are increasingly interconnected. The concept was first introduced in 2016 as a part of the Fifth Science and Technology Basic Plan, which was formulated by the Council for Science, Technology and Innovation (CSTI). Society 5.0 is supposed to help in mitigating several challenges currently faced by Japan’s society, such as demographic ageing, labor shortages, and the depopulation of rural areas. A number of technological developments factor into this, such as artificial intelligence (AI), the Internet of Things (IoT), and robotics. The number of patent applications related to artificial intelligence has increased for many years, as Japan entered its third AI boom in the mid-2010s. The Japanese robotics industry is widely acknowledged as one of the world’s most advanced.

Impact of workstyle reforms and COVID-19

Further important factors that have influenced the IT market recently are workstyle reforms and the coronavirus (COVID-19) pandemic. In June 2018, the government enacted a workstyle reform law, which aimed at the reduction of excessive working hours and the improvement of flexibility and efficiency at companies. During that year, the share of employers offering telecommuting increased considerably. In addition, the coronavirus pandemic that swept the world in 2020 severely impacted the ways people work. A survey conducted from July to September 2020 shows that IT investments aiming at workstyle reforms at private enterprises had increased at the majority of responding businesses during the COVID-19 pandemic. Among other measures, it is now generally expected that many companies will keep remote work as a permanent option. Fujitsu, as one of the largest Japanese companies, announced in July 2020 that it would permanently reduce its office space in Japan by 50 percent. Other changes brought about by the pandemic include a higher openness towards outsourcing, an increased focus on automation, further implementation of AI at businesses and an accelerated adoption of cashless payments by consumers.

In the following 5 chapters, you will quickly find the 27 most important statistics relating to "IT industry in Japan". 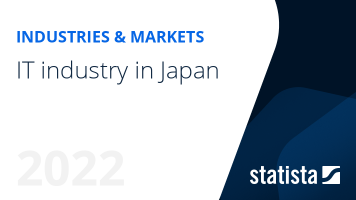 Go to report IT industry in Japan
Top Seller

The most important key figures provide you with a compact summary of the topic of "IT industry in Japan" and take you straight to the corresponding statistics.