Japan is one of the largest internet markets in the Asia Pacific region. The country has a very high internet penetration rate, although the degree of penetration differs with factors such as age, region, and income level. While the internet has been used by the majority of people in Japan since the mid-2000s, geographical differences remain, for instance, between the more urban area of southern Kanto, which includes the capital city Tokyo, and more rural areas, such as Tohoku or Hokuriku.

Internet in Japan usually comes unbundled, meaning that customers, in general, have contracts both with a line provider and an internet service provider (ISP). The main landline providers in Japan are NTT East and NTT West, which are both subsidiaries of Nippon Telegraph and Telephone Corporation (NTT). Leading ISPs include companies such as Asahi Net, Biglobe, Nifty Corporation, NTT Plala, and So-net. Commercial internet services have been available since the early 1990s, with mobile internet developing from the late 1990s onwards. The main mobile carriers in Japan are NTT Docomo, au by KDDI, and SoftBank. These three companies were recently joined by Rakuten, which launched its own mobile carrier service in April 2020. As a breakdown of the internet connection types used by households shows, a majority of Japanese households are using optical fiber and mobile phone lines. Apple iOS is the leading mobile operating system, as it accounts for about two-thirds of mobile web traffic.

According to a survey conducted in September 2021, the most common reasons for using the internet in Japan are using social networking services, communicating with other people via email, and looking up information. Among social networks, Twitter and Instagram enjoy a particularly high popularity, while LINE continues to be the dominating messenger app. A ranking of the most popular websites based on monthly traffic was led by Yahoo, followed by Google and Rakuten. The rollout of 5G networks by Japan’s major mobile carriers, which started in March 2020, is expected to have a beneficial effect on online entertainment. Japan has for a long time been one of the largest mobile gaming markets and the use of streaming services has become more and more common since the mid-2010s, which is partly a result of the increased market competition brought about by major international service providers, such as Amazon, Netflix, and Spotify.
This text provides general information. Statista assumes no liability for the information given being complete or correct. Due to varying update cycles, statistics can display more up-to-date data than referenced in the text.
Published by Statista Research Department, Jul 18, 2022

Most visited websites in Japan 2021, by monthly traffic 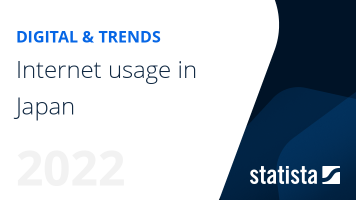 The most important key figures provide you with a compact summary of the topic of "Internet usage in Japan" and take you straight to the corresponding statistics.