Non-alcoholic beverages include a wide range of products, from fruit and vegetable juices to bottled water, carbonated soft drinks, hot drinks and more. Retail sales of non-alcoholic beverages in Hungary have followed an increasing trend in recent years, however, the share of non-alcoholic beverages in retail trade has declined slightly, reaching 2.66 percent as of 2021.
The number of enterprises manufacturing soft drinks and bottled water has decreased since 2008 and amounted to 651 units in 2019. Coca-Cola HBC remained one of the most important companies operating in the field, recording a revenue of 127 billion forints in 2021. The same year, Coca-Cola was also the most popular beverage brand in the country based on the number of consumer reach points.

The revenue of the soft drinks market totaled 2.3 billion U.S. dollars in Hungary in 2021 with carbonated beverages accounting for the biggest share of the revenue. Moreover, according to the Statista Market Outlook, revenues generated by the carbonated soft drinks market are expected to reach 2.1 billion U.S. dollars by 2026. In 2020, Hungarians consumed 237 liters of non-alcoholic beverages per capita on average, namely 117 liters of mineral water, 82 liters of soft drinks and flavored water, 28 liters of juice, and 9.2 liters of iced tea. When it comes to mineral water, over the past years, the consumption of sparkling mineral water became less and less popular while the amount of still water consumed increased.

Per-capita coffee consumption has been on the rise in the last few years, reaching 2.7 kilograms in 2020, with instant coffee and ground coffee accounting for the biggest share of the market. Consequently, the retail sales value of coffee has increased, peaking at 135 billion forints in 2021. However, tea consumption in the country has not undergone such growth, fluctuating between 15 and 23 decagrams per person over the past decade.
This text provides general information. Statista assumes no liability for the information given being complete or correct. Due to varying update cycles, statistics can display more up-to-date data than referenced in the text.
Published by Flora Medve, Jun 7, 2022 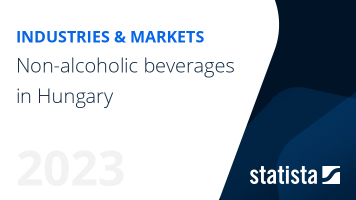 The most important key figures provide you with a compact summary of the topic of "Non-alcoholic beverages in Hungary" and take you straight to the corresponding statistics.