Published by Flora Medve, Oct 19, 2022
In recent years, the Hungarian alcohol market has been dominated by wine and beer, the two most consumed alcoholic beverages in the country. Consequently, beer sales have accounted for the biggest share of the revenue from alcoholic drinks, reaching a value of more than 1.2 billion U.S. dollars in 2021. Based on the data from Statista Consumer Market Outlook, all sectors of the alcohol market are expected to grow over the years to come with the revenue from wine and spirits exceeding one billion dollars by 2025, respectively.
During the Middle Ages, Hungary became one of Europe's most prominent exporters of wine owing to its famous wine regions such as Tokaj, Eger, and Villány. However, nowdays it is difficult to find Hungarian quality wines outside the country's borders. In 2020, Hungary’s most important export markets were Slovakia and Germany, and in terms of import, the value of wine imported from Italy and France was the highest. That same year, wine production in the country totaled 2.9 million hectoliters, of which 101 thousand came from Villány and a further 218 thousand hectoliters originated from the Eger wine region. At the same time, the volume of wine originating from Tokaj totaled 111 thousand hectoliters.

The spirits industry generated revenue worth 764 million U.S. dollars in 2021 and this figure is expected to increase in the coming years. Since 2012, liqueurs and other spirits have accounted for the biggest share of the market’s revenue, followed by brandy and whiskey. In terms of distilled alcoholic beverages in Hungary, the country’s home-distilled spirit, palinka, deserves a special mention. The production of pálinka in Eastern Europe goes back to the Middle Ages, and in 2010, the Hungarian government liberalized its home distillation with the intention of preserving the tradition. The trend of pálinka production is still a growing one. In 2019, there were over 24.4 thousand pálinka distillation devices in use, and each year an increasing number of distilleries offers private pálinka productionservices. However, the rising popularity of home distillation, together with the implementation of the public health product tax and illegal distilling, inevitably lead to a decrease in the commercial market.

In the following 5 chapters, you will quickly find the 40 most important statistics relating to "Alcohol market in Hungary". 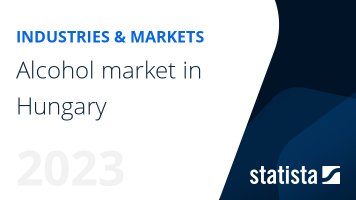 The most important key figures provide you with a compact summary of the topic of "Alcohol market in Hungary" and take you straight to the corresponding statistics.