Published by Statista Research Department, Nov 17, 2022
The household appliances market has steadily expanded in Russia in recent years. Impacted by the exodus of several international brands from the market in response to the war in Ukraine in 2022, the market was expected to shrink by nearly 43 percent in that year. In 2020, the COVID-19 pandemic contributed to the e-commerce development in the market, which was reflected in the growing number of online customers for such products, with the largest number of users ordering small appliances via the internet. In 2021, the most significant increase in consumer demand was recorded for smart speakers and robot vacuum cleaners.

Russia had one of the highest refrigerator and washing machine ownership rates worldwide. Almost all households in the country possessed these appliances. Furthermore, these two products accounted for the largest share of the major appliances’ sales revenue in the country, which was forecast at nearly 2.6 billion U.S. dollars in 2022. In the following five years, the segment was projected to grow slowly, remaining below the pre-war level. In view of the Western sanctions on Russia in 2022, which included a ban on exports of certain high-tech goods to the country, Russian producers could face manufacturing challenges and have to domestically produce or find new import partners for certain parts. In 2021, 12 million large appliances were produced in the country.

The small appliances segment was highly dependent on imports, mostly from China, Belarus, and Vietnam. Vacuum cleaners were the most imported product category, followed by food grinders and mixers. In 2021, Russia imported vacuum cleaners worth nearly 758 million U.S. dollars. Between 2020 and 2021, a significant increase was recorded in imports of coffee and tea makers, at over 32 percent.

Among the brands that suspended their operations in Russia due to the invasion of Ukraine are Acer, Asus, Bosch, Dell, Dyson, HP, LG, Panasonic, Sharp, Siemens, and Whirlpool. As the Statista Global Consumer Survey revealed, Russians were among the most brand-aware customers globally when it comes to household appliances. The leading brands of choice were Samsung, Bosch, and LG. In the absence of Western companies' products, Russian electronic retailers recorded an increase in sales of brands from China, the Commonwealth of Independent States (CIS), Russia, and Turkey.

In the following 5 chapters, you will quickly find the 35 most important statistics relating to "Household appliances market in Russia". 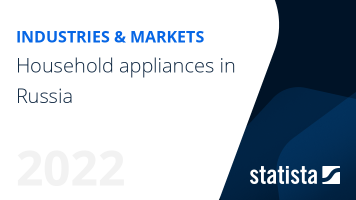 The most important key figures provide you with a compact summary of the topic of "Household appliances market in Russia" and take you straight to the corresponding statistics.