Europe is a major market for the household appliances industry, generating sales revenues of more than 100 billion U.S. dollars every year. Major appliances, including washing machines, refrigerators, and dishwashers, accounted for roughly 60 percent of the market. Sales of small appliances such as coffee machines, toasters, juicers, blenders, and mixers make up the remaining 40 percent of the European home appliance market.

The employment of more than 200 thousand people in Europe is directly tied to Europe's home appliances industry, as the continent is home to some of the world's largest home appliance companies. The list of European household appliances companies includes the Germany-based BSH Group and Miele, the SEB Group in France, the Swedish manufacturer Electrolux, and Arcelik from Turkey. In 2020, more than 150 household appliances manufacturing sites were located in Europe, with Germany, Italy, France, Turkey, and Poland each hosting more than ten such sites.

Refrigerators are the most owned household appliance in Europe, with more than 90 percent of households in the most populous countries in Europe owning a refrigerator. A similar share of households owns a washing machine in each country. Dishwashers are less common, with none of Europe's most populous countries exceeding an ownership rate of 72 percent in 2020.
Some significant differences amongst European countries can be found in small appliances' ownership rates . For example, coffee machines are much less part of households in the United Kingdom than in continental European countries, as traditionally, tea is more popular than coffee in the U.K.

Despite the initial drop in the first half of 2020, appliance sales quickly picked up momentum during the pandemic. Sales of core appliances – including washing machines, refrigerators, and dishwashers – took an impressive jump to reach double-digit growth in Europe in the second half of 2020. The pandemic and the remote practices that resulted from it forced people around the globe to retreat to their homes and focus their attention on home environments, which gave appliance sales a rare push that lasted well into 2021.
This text provides general information. Statista assumes no liability for the information given being complete or correct. Due to varying update cycles, statistics can display more up-to-date data than referenced in the text. 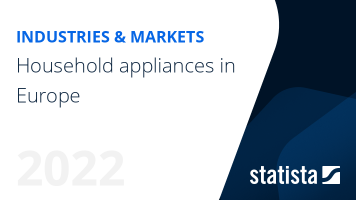 The most important key figures provide you with a compact summary of the topic of "Household appliances in Europe" and take you straight to the corresponding statistics.