Published by C. Diep, Apr 13, 2022
Sake, also known as Japanese rice wine, refers to an alcoholic beverage made from fermented rice. While a variety of fermented rice liquors are produced in Asia, sake is considered the national beverage of Japan. It represents the main product line of almost half of licensed liquor manufacturing sites in the country, but the number of commercial manufacturers has been declining among falling demand in the domestic market.

The main ingredients of sake are polished rice, rice treated with koji-fungi, water, and yeast starters. The starchy cores of milled rice grains are transformed into sugar by the koji-fungi, which subsequently undergoes fermentation due to yeast. As milling is required to prevent the development of off-flavors, premium liquor using highly polished grains requires large amounts of rice in production. The brewing industry processes more than 200 thousand tons of rice for sake, with general table rice and close to 100 sake rice variants being approved as raw materials. Other additives permitted include alcohol, clear distilled liquor (shochu), sugar, organic acids, and amino acid salts.
While only the filtered alcohol is bottled and distributed as sake, solid by-products are processed in other industries. The Japanese snack food industry produces rice confectioneries like crackers and sweets with the rice flour from milling, whereas the rice mash (sake kasu) remaining after filtration is considered a highly nutritious health food ingredient in Japanese cuisine. Additionally, the lees are shipped to the beauty industry and processed in skincare products similar to distillers grains.

A variety of alcoholic beverages in Japan contains a variation of the word “sake” in their names. To differentiate the refined sake from the general word for alcoholic drinks (sake), it is also referred to as “Japanese liquor” (nihonshu) or, as per Japanese liquor law, labeled as “clear liquor” (seishu). Other beverages like cloudy sake (nigorizake) and the sweet, fermented alcohol amazake are widely available in the domestic market, but they are prohibited from being labeled as seishu. Furthermore, synthetic sake (gosei seishu) refers to a sake-flavored alcoholic drink produced without rice. It grew popular as a substitute during the Second World War following rice shortages but has since lost importance in the Japanese market.
While the majority of liquors labeled as seishu are comparable to table wine in quality, special-designation sake (tokutei meisho-shu) represents the premium category distributed at higher price points. Separated into eight grades, the designation depends on the rice polishing ratio, the ratio of koji-rice to other ingredients, and whether distilled alcohol has been added. The most produced premium quality sake among the four main grades is junmai-shu, which is characterized by a non-stipulated rice polishing ratio, 15 percent koji-rice, and the addition of distilled alcohol.

In drinking establishments, sake is commonly served in ceramic flasks with small cups, whereas large glass bottles are designated for distribution in retail stores. To make the liquor more suitable for casual drinking, manufacturers entered the ready-to-drink market with smaller servings filled in topless beverage cans. But sake is not the beverage of choice for frequent consumption in large amounts due to the high alcohol content, averaging 15 percent. Instead, other low-alcoholic drinks like beer and highballs emerged as popular liquors for casual drinking occasions as the consumption of sake declined steadily. Nonetheless, the national beverage maintains a symbolic role in Japan, being used in rituals, ceremonies, and celebratory events.

In the following 5 chapters, you will quickly find the 28 most important statistics relating to "Sake market in Japan". 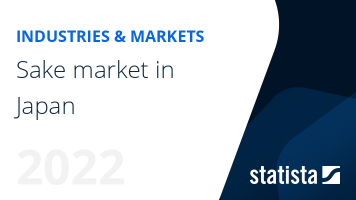 The most important key figures provide you with a compact summary of the topic of "Sake market in Japan" and take you straight to the corresponding statistics.