Finding the niche in the market

While the Japanese alcoholic beverage industry is characterized by the prominence of large breweries, the soft drink market is more diverse in competition. The liquor manufacturers appeal to consumers with a broad product portfolio overstretching sweet drinks, mineral water, and other RTD beverages. Suntory Holdings emerged as the leader among the beer brewers, with non-alcoholic beverages and foodstuff being the holding company’s largest business segment.
In contrast, fellow competitors such as Ito En and Kagome followed a different market strategy by setting their focuses first and foremost on one market segment. Ito En established itself as a major RTD tea manufacturer, with the company’s bottled green tea products being a commercial success in Japan. Meanwhile, Kagome operates in the juice segment, with the company’s Kagome brand being well known for its fruit and vegetable juices.

Over the past years, tea and coffee specialties gained popularity throughout Japan, with the tea market profiting from the demand for healthy refreshers on the go. The brewed beverages are commercially available as bottled RTD drinks, with coffee-based beverages being further sold as canned drinks as well. In contrast to the successful performances of tea and coffee, carbonated soft drinks are struggling to expand in the market. Carbonates in Japan include a large product range of sweetened drinks like colas and lemonades as well as flavored, unsweetened water for health-conscious consumers. Additionally, manufacturers are frequently releasing seasonal flavors to make use of the charm of limited editions. But the bubbly experience is not a choice for all consumers, with the segments facing the challenge of long-standing consumer preferences for tea, which are also supplemented by limited releases.
To cater to the busy work-life in Japan, major distribution channels of soft drinks are not limited to store-based retailers. The wide availability of vending machines selling RTD beverages contributes a significant part to the success of soft drinks. Installed at street corners, alleyways, and airports, among other places, beverages are sold either cooled or heated according to the season.

In the following 8 chapters, you will quickly find the 41 most important statistics relating to "Non-alcoholic beverages market in Japan". 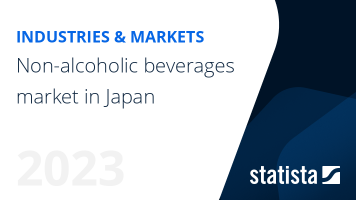 The most important key figures provide you with a compact summary of the topic of "Non-alcoholic beverages market in Japan" and take you straight to the corresponding statistics.