The economy of dairy products in France - statistics & facts

France enjoys a varied and voluminous dairy market. The vast majority of the milk produced in the country is processed to obtain other dairy products, the leader of which is cheese.
From butter to yogurt, as well as creams and cheeses, French people spend billions of euros each year to satisfy their dairy cravings. Even though cheese is one of the most appreciated products, it is neither the most produced, nor the most consumed kind of dairy product in terms of quantity. However, while milk holds this particular record, cheese remains the highest grossing actor on this market.

Even though butter and cream are consumed in a lesser amount, they are still widely used. Butter is consumed daily by a majority of people.
In terms of dairy desserts, yogurts are produced in the highest volume, and within this category, the leaders are fruit flavored yogurts. Nonetheless, the products offered remain diverse, thus ensuring that the market has an option for (almost) everyone.

There is a particular savoir-faire when it comes to French dairy products. Indeed, over a thousand varieties of cheese are recorded across the country, but butter and creams can also be at the center of ancestral regional techniques. For many manufacturers and regions, obtaining one of the coveted PDO (Protected Designation of Origin) labels is a crowning achievement. On average, products with a label have a higher price per kilogram. However, as labels are highly controlled, and being granted one is an arduous task, labels can be seen as proof of the quality and effort behind a product.
This text provides general information. Statista assumes no liability for the information given being complete or correct. Due to varying update cycles, statistics can display more up-to-date data than referenced in the text.

Sales value of dairy food products in France 2021-2022, by type of product

Most produced type of yogurt in France
Fruit flavored yogurts

Production of yogurts in France 2019, by kind

Production volume of milk and dairy products in volume in France 2020, by type

Sales value of dairy food products in France 2021-2022, by type of product

Consumption of milk, butter and cheese per capita in France from 2010 to 2019 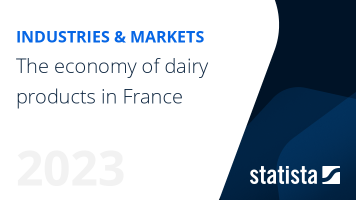 The most important key figures provide you with a compact summary of the topic of "Economy of dairy products France" and take you straight to the corresponding statistics.