French consumers are increasingly turning to products that they hope are more respectful of the environment, their health, and the conditions of production. In this context, fair trade products have experienced strong growth in recent years. Indeed, in 2021, French people consumed around 12 percent more fair-trade products than the previous year, with purchases totaling 2.04 billion euros.
Likewise, eating organic and eating local are two trends that have been growing consistently over the past decades. In just two decades, the organic market turnover was multiplied by eleven, and consumer enthusiasm for more natural products shows no sign of abating. Furthermore, French consumers are not only turning away from processed or ultra-processed products, but also choosing to purchase their food closer to home (local shops, farm drives, or directly from producers).
In keeping with environmental concerns, the market for meat substitutes has exploded to answer French consumers’ growing needs. Indeed, an increasing number of people are reducing their meat intake, opting for a flexitarian,vegetarian, or vegan diet. A clear example is the number of plant-based protein products on the market, which has recorded a growth of 396 percent between 1999 and 2019.

Dietary plans: a path between health and religion

On the other hand, the food market is also influenced by dietary requirements. An example is the steady rise in awareness of gluten intolerance, a group of proteins commonly found in cereal grains and their by-products. Consequently, this has led to a surge in the popularity of gluten-free food products and a corresponding increase in the size of the market in France.
Similar to health, religions, such as Islam, can also influence the market. Indeed, the halal food sector is another highly dynamic segment in the country, recording an increase of over 250 million euros in a little over a decade.
Which foods are halal (lawful) or haram (forbidden) is specified by Islamic regulations from rules found in the Quran. This set of rules is followed by Muslim people with varying degrees of strictness. For instance, in 2020, over half of French Muslim people said they were careful to systematically buy halal food.
This text provides general information. Statista assumes no liability for the information given being complete or correct. Due to varying update cycles, statistics can display more up-to-date data than referenced in the text.

Eloise Trenda
Research Expert covering global food topics with a focus on the French, Spanish, and LATAM markets
Get in touch with us now
Published by Eloise Trenda, Aug 16, 2022

Number one diet in France
Flexitarianism

Diets and nutrition in France 2022

Share of the food market held by organic products in France
6.6%

Diets and nutrition in France 2022

Plant-based products most consumed in France 2020 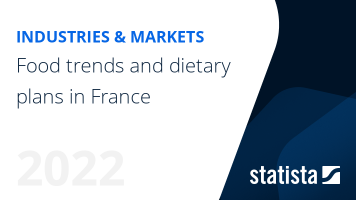 The most important key figures provide you with a compact summary of the topic of "Food trends and dietary plans in France" and take you straight to the corresponding statistics.