Published by G. Wanat, Aug 1, 2022
The Polish dairy market is one of the most important food markets in the country. Not only does the market consist of traditional segments, which include established product categories and brands, but it is also appealing to Poles who are curious and willing to try new alternatives. So, the dairy market accommodates room for products that promote a healthy lifestyle, as well as those suitable for various diets. Consequently, the dairy and egg market revenue has seen a steady increase over the years, and it is forecast to reach 10.2 billion U.S. dollars by 2027.

The import volume of milk and cream fluctuated over the last few years, amounting to approximately 198 thousand metric tons in 2021. Poles most enjoyed Lithuanian and German milk products; the leading partners constituted nearly 80 percent of milk and cream import value in the same year. In terms of export value share, Polish milk and cream products were mostly present in German and Chinese markets.
The export value also differed across the years in the cheese segment, peaking at nearly 1.1 billion U.S. dollars in 2021. Czech, German, and Ukrainian consumers especially favored Polish cheese. These three countries account for around one-third of export value share. Poland has also been open to trying foreign cheese products which can be observed in the increasing cheese and curd import volume.

There has been a significant increase in the share of households that turned to plant-based alternatives. In 2020, almost 30 percent of Polish families chose plant-based dairy, whereas approximately 19 percent favored eco and bio-dairy products. Affordable price and taste similar to that of traditional dairy were among the most important characteristics of plant-based alternatives. At the same time, attributes such as an attractive packaging design or interesting product name did not bother those who opted for plant-based dairy substitutes.
In terms of particular segments, non-dairy milk consumption was most prevalent among Poles aged 25 to 34 years old. On the contrary, Polish seniors were least in favor of non-dairy milk, with only two percent consuming plant-based alternatives of cow's milk at all times. Cheese plant-based alternatives - for instance, products made from cashew nuts - were not particularly enjoyed in Poland. When given the choice between purchasing traditional cheese products and their non-dairy substitutes, nearly seven in ten Poles always chose traditional cheese. In 2022, Alpro was the most popular plant-based drinks brand, consumed by about six in 10 Poles.

In the following 7 chapters, you will quickly find the 53 most important statistics relating to "Dairy market in Poland". 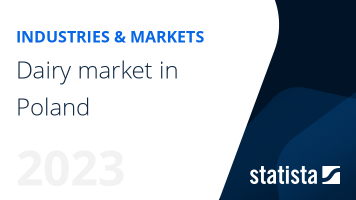 The most important key figures provide you with a compact summary of the topic of "Dairy market in Poland" and take you straight to the corresponding statistics.