The Polish confectionery market has been developing strongly since the 1990s. The collapse of communism, followed by joining the European Union in 2004, resulted in increased foreign investments, new companies, as well as the modernization and expansion of existing enterprises. Thus, confectionery and snacks market revenue has seen a gradual increase over the years and is established to reach over 14 billion U.S. dollars by 2027. As of 2021, the confectionery and snacks segment in Poland generated 289.4 U.S. dollars in revenue per capita.

Chocolate or sugar confectionery - what do Poles love more?

In general, sugar candy appears to be in higher demand than chocolate. In fact, the production value of sugar confectionery was over three times higher than that of chocolate in 2020, amounting to nearly 110 million euros. Moreover, consumption of confectionery products has maintained a rather regular trend since 2012, with an average Polish consumer eating 280 grams of confectionery goods on a monthly basis in 2021. On the other hand, the average monthly expenditure on confectionery has witnessed an upward trend, indicating potentially rising prices of these products.
Nevertheless, chocolate products are most definitely catching up with their sugar counterparts. When looking at chocolate consumption, figures show that an average Pole eats 200 grams of chocolate each month. So, unlike sugar confectionery which showed regular consumption volumes, monthly consumption of chocolate increased by over 122 percent during the period of observation. In 2020, chocolate tablets recorded a five percent increase in sales, compared to candies and lollipops, where sales decreased by three percent.

Chocolate production directly in Poland between 2015 and 2020 decreased by 3.83 million euros. The United Kingdom and Germany were most fond of Polish chocolate goods, importing over 91 thousand and 82 thousand metric tons, respectively.
Chocolate import value changed more over the last few years. In fact, the highest decrease was recorded between 2008 and 2009 and amounted to nearly 17 percent. Still, Poles love their chocolate and prefer their Western neighbors' products the most, considering import values. In 2021, Poland imported German chocolate goods worth a total of 531.58 million U.S. dollars.
This text provides general information. Statista assumes no liability for the information given being complete or correct. Due to varying update cycles, statistics can display more up-to-date data than referenced in the text.
Published by G. Wanat, Nov 4, 2022

Revenue of confectionery and snacks in Poland 2017-2027

Number of cocoa, chocolate and sugar confectionery manufacturers in Poland 2009-2019 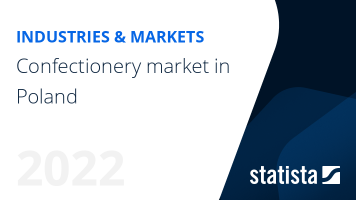 The most important key figures provide you with a compact summary of the topic of "Confectionery market in Poland" and take you straight to the corresponding statistics.