Published by Statista Research Department, Jul 14, 2022
The Tour de France is a world-famous cycle race that took place for the first time in 1903. Its route crosses France and even passes occasionally into some neighboring countries. Also known as the "Big Loop", the Tour de France is one of the biggest events in the world of cycling taking place every year.
As a major international sporting event, the Tour de France welcomes cyclists from around the world. Although French cyclists have won this competition more than cyclists from any other nation, other countries, mostly European, are now also strongly represented in rankings. Since the creation of the competition, the number of participating cyclists has increased and even tripled in some years. In 1986, the 73rd edition of the Tour de France attracted the largest number of competitors, with 210 cyclists on the starting line. However, even if the entrants are numerous, they do not all cross the finish line. The year 1919 was a special one, as only about ten riders managed to finish this race, which was won by the Belgian cyclist Firmin Lambot.

Before being found guilty of illegal doping activities and stripped of all his titles, the American rider Lance Armstrong was for a long time the winner of the most editions of the Tour de France. Today, the cyclist with the most victories on the Tour de France podium is the Frenchman Bernard Hinault, with seven victories to his name, including five in first place on the podium.

In 2021, this men’s sporting event, now more than 100 years old, took place from June 26 to July 18. Composed of 21 stages, the 108th edition opened in Brittany with the city of Brest as starting point. The winner of the 2021 Tour de France was Tadej Pogacar, rider of the UAE Team Emirates. With an average speed of 41.17 kilometers per hour, the Slavic-born cyclist was the fastest to cover the 3,383 kilometers that separated him from the finish line. While the yellow jersey holder in the general classification of the competition also excelled in the mountain stages, he was nevertheless surpassed by the British cyclist Mark Cavendish in the sprint, making him the green jersey holder of the 2021 edition of the tour de France.

In the following 6 chapters, you will quickly find the 28 most important statistics relating to "Tour de France". 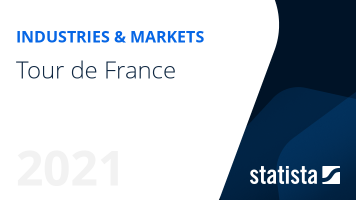 The most important key figures provide you with a compact summary of the topic of "Tour de France" and take you straight to the corresponding statistics.

Cycling in the United Kingdom (UK) 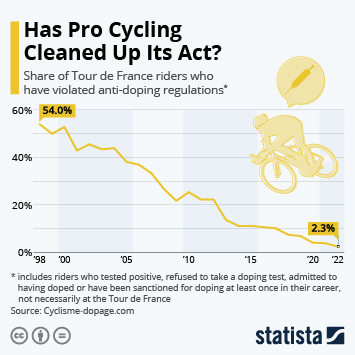 Has Pro Cycling Cleaned Up Its Act? 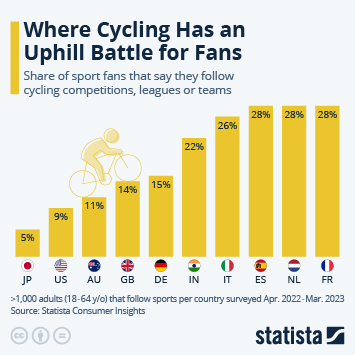 The Cycling Fandom of Europe