Published by Flora Medve, Sep 9, 2022
Even though Hungary might not figure among the world's leading gaming markets, the popularity of video games is undoubtedly on the rise. This is especially the case with mobile games as easy internet access and development of the smartphone market made them easily accessible. In 2021, mobile games accounted for the highest share of the Hungarian video game market revenue, which totaled 89 million euros. In the same year, the number of mobile game players in the country reached 1.9 million and is expected to increase to 2.2 million by 2025.

The Hungarian eSports market generated an estimated revenue of 65 billion forints in 2021. Taking advantage of the growing market, several sports clubs decided to create eSports departments; these were well received within the gaming community. In addition, since 2018, dedicated young gamers have had the opportunity to enroll in eSports-oriented high schools in Budapest. Based on yearly earnings, in 2022, torzsi (Ádám Torzsás) was the most successful Hungarian eSports competitor. Although shooter games were most likely to appear among the most popular titles, League of Legends - an online battle arena game - was eSports players’ first choice in 2021.

One of the leading companies in the Hungarian gaming industry is Zen Studios, known for developing pinball machine games for iOS, Play Station 3, and Xbox 360. In 2021, Zen Studios recorded a revenue of approximately 2.5 billion forints, one of the highest among Hungarian game development companies. Another key player in the industry is Invictus Games. The company initially specialized in racing simulation games for Microsoft Windows; however, since 2009, it has been focusing on mobile games. Similarly, Primal Game Studio, mostly known for developing PC games, has also been working on adding mobile and console games to its portfolio.

In the following 6 chapters, you will quickly find the 25 most important statistics relating to "Video games in Hungary". 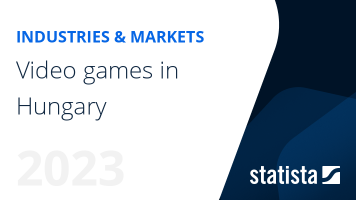 The most important key figures provide you with a compact summary of the topic of "Video games in Hungary" and take you straight to the corresponding statistics.