Published by Statista Research Department, Aug 25, 2021
As of August 2021, the Taliban reestablished their rule over Afghanistan following the withdrawal of U.S. troops and their NATO partners. With that, the United States ended their almost 20-year mission in the country which began as a direct result of the September 11, 2001 attacks on the World Trade Center and Pentagon on U.S. soil. Al-Qaida and their leader Osama bin Laden were responsible for the terrorist attacks and were at the time sheltered by the Taliban in Afghanistan, which thus led to the U.S. invasion of Afghanistan and the consequent overturning of Taliban rule over the country. It was then the mission of the U.S. troops and their NATO partners to stabilize the country and help establish a stable democratic country. However, it can be argued that neither political nor economic stability has been reached in the past 20 years.

According to the 2021 Fragile States Index, Afghanistan is one of the world's most unstable countries. Afghanistan bears the highest terrorism risk worldwide according to the Global Terrorism Index of 2020. The current score on the Human Development Index is 0.51, which means that Afghanistan is characterized as a country of low development, ranking 169 out of 189 countries. There is a strong contrast of the Human Development Index between Afghani women and men, where the latter scores significantly higher. Afghanistan is the largest opium producer in the world; the trade of which was the leading financing tool of the Taliban.

Return of the Taliban and its implications for the Afghan people

The withdrawal of U.S. troops was negotiated between the Trump administration and the Taliban in February of 2020. The Afghan government was excluded from these talks. In return for the complete departure of their troops, the U.S. agreed to free 5,000 imprisoned men of the Taliban. The Biden administration extended the deadline of their complete exit from May 13th, 2021 to September 11, 2021.

The swift and resistance-free takeover of Taliban rule over Afghanistan took many in the country and abroad by surprise. But looking closer at the politically unstable structure of the country as foreign troops exited, it can be seen as an inevitable development. During the United States mission in Afghanistan, an emphasis in reestablishing a democratic rule was made on a centralized government, disregarding the culture, ethnic, or tribal structures of the country. Many tribal leaders and municipal representatives felt disenfranchised by the central government and were, therefore, able to be persuaded by the Taliban to hand over their district. This was exacerbated by the idea that the central government would lose foreign aid and support once the troops leave the country. Those leaders agreed to hand over power to the Taliban in return for free passage and the safety of their lives. It is important to note, even at the best time, the Afghan government never held control over the majority of the 408 districts in the country.

In 2019, the majority of Afghans believed that reconciliation with the Taliban was possible. However, many are uncertain today as the Taliban have extended their power in the country. Many of those Afghans are worried about the Taliban's retaliation due to their connection or work for foreign allies. In response, the Taliban claims to be reformed and more moderate. Nevertheless, people within the country and experts abroad are skeptical, and this is seen only as a tactic to keep foreign aid flowing.

In the following 7 chapters, you will quickly find the 31 most important statistics relating to "Current political situation of Afghanistan 2021".

Statistics on the topic
Country with the biggest global terrorist threat worldwide
Afghanistan
Number of terrorist attacks in Afghanistan in 2020
1,722
Afghanistan's score on the Fragile States Index in 2022
105.9 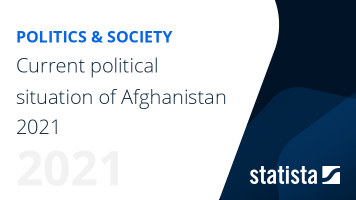 The most important key figures provide you with a compact summary of the topic of "Current political situation of Afghanistan 2021" and take you straight to the corresponding statistics. 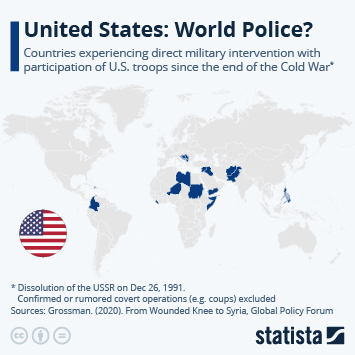 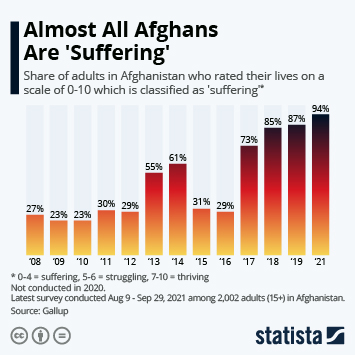 Almost All Afghan's Are 'Suffering'