The food industry in Brazil generated a revenue of approximately 250 million dollars, making it the seventh-largest country in the world for this industry, behind Indonesia and just ahead of Germany. Supermarkets play a significant part in this industry, as about 55 percent of all food retail sales in Brazil in 2021 were specifically made by supermarkets. Not only are grocery stores the biggest generators of sales, but they are also the most common type of food retailer in the country.

Carrefour is a French food retail group present in various countries in Europe and worldwide, including Brazil. In the South American country, the Carrefour Group has the highest market share of leading supermarket chains. More specifically, the French retailer had a gross revenue of over 74 billion Brazilian reals in 2020.

GPA, one of the largest Brazilian food groups

After Carrefour, Brazil's top supermarket is Assaí Atacadista, which is part of the GPA group, also known as Grupo Pão de Açúcar. Thus, the Brazilian conglomerate is one of the leading companies within the grocery retail industry, with a gross sales value of 55.73 billion Brazilian reals.

Assaí Atacadista supermarkets is one of the leading brands of the Pão de Açúcar group, which is the second-largest business unit of GPA by number of employees, with a workforce of approximately 49,000 people. Assaí Atacadista had more than 180 supermarkets in 2020.
This text provides general information. Statista assumes no liability for the information given being complete or correct. Due to varying update cycles, statistics can display more up-to-date data than referenced in the text.

Number of food retailers in Brazil
91,351

Number of employees in the food retail industry in Brazil
3m 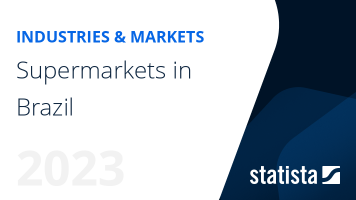 The most important key figures provide you with a compact summary of the topic of "Supermarkets in Brazil" and take you straight to the corresponding statistics.