Published by
Eloise Trenda,
Jan 24, 2022
Latin America is one of the regions with the highest use of agrochemicals, such as glyphosate. However, some producers in the region strive to keep soil and plants free from such synthetic ingredients by growing organic crops.
The hectarage of organic crops has gone through considerable growth in Latin America since its first measurement in 2000, with Argentina and Uruguay as the leading countries in terms of in organic farmland area. In 2017, there were over 455 thousand registered organic producers in the whole region, and the key permanent organic crops were coffee and cocoa. The interest in this kind of agriculture shows in the increased market value of bio pesticides and organic fertilizers. At the end of the industry’s chain, Latin American consumers also have a growing interest in agrochemical-free fruits and vegetables, dairy food and beverages and health and wellness foods.

Argentina's organic crops extend from oilseeds to the traditional yerba mate. The food industry in the South American country also registers positive numbers in the organic packaged food and beverage sales. In spite of its smaller organic farmland area compared to Argentina, Mexico’s organic agricultural production is growing in market value. The industry accompanies the expansion, as some important companies selling organic products are based in the country. Furthermore, sales of organic packaged food and beverages are expected to keep growing in Mexico, as consumers of all ages, income and genders show interest in healthier eating habits.

Near Mexico, another large Latin American market for organic food and beverage is Brazil. In 2018, a survey showed that 48 percent of the respondents in the country bought organic products. The results are aligned with the growing consumption value of organic packaged food and beverages in the country. As in Mexico, consumption of organic products also influence Brazilian buyers independently from gender, age and income.

In the following 5 chapters, you will quickly find the 25 most important statistics relating to "Organic Food Market in Latin America". 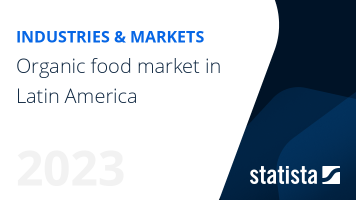 The most important key figures provide you with a compact summary of the topic of "Organic Food Market in Latin America" and take you straight to the corresponding statistics.