The Colombian supermarket sector is among the largest in Latin America and one of the main sources of employment in the country. Colletively in 2019, the major supermarket chains such as Éxito, Olímpica, and Alkosto generated annual sales revenues of over 20 million U.S. dollars, while Grupo Éxito alone accounted for over eighty percent of the total. Even with traditional supermarkets acting as the main players of the Colombian retail sector, other formats such as discounters are gaining ground, along with a large quantity of convenience stores that have traditionally shaped the Colombian retail landscape.
Grupo Éxito is the supermarket operator with the largest workforce in Colombia, partly due to its widespread and diversified store formats throughout the national territory. This group operates a chain of traditional supermarkets under two main brands: Éxito and Carulla. Its low-cost segment is marketed through the brands Super Inter and Surtimax, while the brand Surtimayorista specializes in the cash & carry format. This company is not only the largest food retailer in the country, but it is also the most valuable supermarket brand in Colombia.

In recent years, grocery retailers operating under the format of soft and hard discount have had enormous growth in Colombia. It is forecast that by 2023, the market value of this retail format would reach 25 trillion Colombian pesos, representing more than 30 percent of the Colombian supermarket sector. Supermarkets such as D1, Ara, and Justo & Bueno have become the leading grocery discounters. Together, they operate a network of over 2,800 stores.

The rise of online grocery shopping

Huge potential in the supermarket sector relies on online grocery shopping. In Colombia, home delivery accounts for over 16 percent of foodservice sales. And with the onset of digital technology, 67 percent of survey respondents claimed to have ordered groceries from online sources either via supermarket platforms or using specialized apps. Furthermore, new online supermarket startups such as Mercadoni and Merqueo are gaining popularity as they have proved successful in connecting customers with grocery shops and supermarket chains. Both launched in 2015, they attracted investments for over 33 million U.S. dollars combined in 2020, making them some of the best funded online supermarkets in Latin America.

Leading supermarket retailers by revenue in Colombia in 2020

Leading supermarket retailers by net income in Colombia in 2020 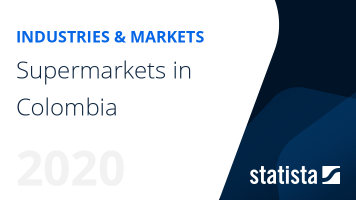 The most important key figures provide you with a compact summary of the topic of "Supermarkets in Colombia" and take you straight to the corresponding statistics.