Published by Emma Bedford, Nov 23, 2022
With an estimated total population of approximately 211 million people, it is no surprise that the revenue of the food market was among the ten highest-grossing in the world, amounting to almost 250 billion U.S. dollars in 2020. Thethe food and beverage industry revenue has nearly doubled since 2010, which represents eleven percent of itsgross domestic product (GDP) in 2020.

The importance of the meat industry

In Brazil, a country famous worldwide for its barbecues and steakhouses, the sector of meat derivatives was the highest-grossing segment in the food industry, with a net revenue amounting to 168 billion Brazilian reals in 2019. In that same year, meat products accounted for nearly ten percent of Brazilian food and beverage retail sales.

Regarding meat consumption, poultryis by far the favourite meat-type amongst Brazilians, with an estimated 41 kilograms per capita consumed in 2020. Beef and veal are more widely consumed in Brazil, contrary to the worldwide trend where porkis the second most popular type of meat.

Aside from the meat, although the combination of rice and beans has historically been the basis of the traditional Brazilian diet, mainly because of its high nutritional value and economic cost, the famous duo has been losing space in the age of fast pace. In fact, in the last two decades, the per capita consumption of beans decreased by approximately 50 percent. On the other side, the consumption of dairy products would slightly increase according to the recent forecasts.

An overview of the leading food brands

JBS, one of the largest meat producers in the world, is a company headquartered in the Brazilian city of São Paulo, which owns and markets leading meat brands such as Friboi and Seara. In 2019, JBS was the country’s leading food and beverage company based on sales revenue, whereas BRF, another major food manufacturer that markets brands such as Sadia and Perdigão, also ranked amongst the first ten highest-grossing food companies.

In the following 5 chapters, you will quickly find the 30 most important statistics relating to "Food industry in Brazil". 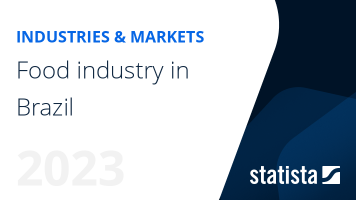 The most important key figures provide you with a compact summary of the topic of "Food industry in Brazil" and take you straight to the corresponding statistics.