Impact of COVID-19 on the automotive industry worldwide - Statistics & Facts

Published by
Mathilde Carlier,
Dec 8, 2021
The automotive industry faced various setbacks in 2020 as more and more countries across the globe limited transportation as a result of the coronavirus (COVID-19) outbreak. These included a prolonged truncation of demand due to national lockdowns and a slow-down of supplies as manufacturing plants temporarily closed. These effects began in China, where car sales plummeted in February 2020. By April of that same year, sales had plunged in the United States and Europe. Month-over-month passenger car sales in Europe dropped by over 65 percent between March and April 2020.
While demand started to pick back up in 2021, the semiconductors sector had scaled back its production of microchips due to a lack of demand in 2020. Semiconductors are an essential part of car manufacturing, controlling air conditioning systems, monitoring tire pressure, or ensuring that the airbag is triggered in the event of an accident. The global chip shortage, therefore, impacted automotive supplies, making it harder for manufacturers to meet the new car demand. In June 2021, Toyota recorded the lowest vehicle inventory across automotive brands in the U.S.

The global drop in supply and demand

Worldwide car sales dropped to 63.8 million in 2020, with a slow recovery projected in 2021 up to 66 million sales. Europe is forecast to record the quickest light vehicle sales growth between 2021 and 2022, followed by the United States and China, but this will not offset the region’s 21 percent dip between 2019 and 2020. Motor vehicle production had been slowing down in various European markets since around September and October 2020, after rebounding from the April 2020 slump. The United States faced a similar outlook, with its inventory-to-sales ratio rapidly declining since April 2020. Interest rates on 60 months new car loans were also the lowest they have been since September 2014.

The impact of COVID-19 was also reflected in motor vehicle manufacturers’ worldwide sales. The Volkswagen Group and Toyota recorded drops of over a million units in their deliveries. Volkswagen temporarily closed its European manufacturing plants for a few months in March 2020 as a response to the pandemic. Along with Toyota, both manufacturers faced production cuts in August 2021 due to the global chip shortage. Both manufacturers also recorded significant drops in revenue, of just under 30 billion euros for Volkswagen AG and over 2 trillion Japanese yen for Toyota.

A shift in consumers’ needs

The COVID-19 pandemic also influenced consumers’ perception of their vehicle needs. In a 2020 survey, 67 percent of Chinese respondents reported reconsidering the number of vehicles needed for their households because of the pandemic. This share of respondents dropped to 41 percent in the United States and 25 percent in Germany. Online vehicle sales were also popular for 49 percent of Chinese respondents to a May 2020 survey, denoting a certain hesitancy towards buying a car online, despite the boom of the e-commerce industry amidst the pandemic. By contrast, interest in electric vehicles increased by 56 percent in North America, 46 percent in Asia, and 29 percent in Europe.

The U.S. records the highest total consumer spending on transportation worldwide, dwarfing all other countries. Between April 30 and May 1, 2021, some 19 percent of the U.S. consumers surveyed planned to delay vehicle purchase, a drop compared to August 2020. The hesitancy to purchase a vehicle online was also present in the U.S., consumers preferring to use online methods to find information on purchase incentives and to qualify for financing options. Reviewing and signing the final contract, acquiring the vehicle, and test-driving the car through home delivery options were by contrast less popular options. Consumers further reported the main hurdle to online car purchases to be having to see the vehicle before buying it.

In the following 5 chapters, you will quickly find the 30 most important statistics relating to "Impact of COVID-19 on the automotive industry worldwide". 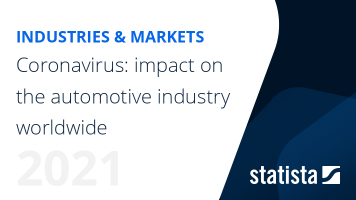 The most important key figures provide you with a compact summary of the topic of "Impact of COVID-19 on the automotive industry worldwide" and take you straight to the corresponding statistics.

Coronavirus: impact on the transportation and logistics industry worldwide