The FIFA World Cup 2022 is taking place in Qatar from November 20 to December 18. The tournament first took place in 1930 and is held every four years, making this the 22nd World Cup. It marks the first World Cup to take place in an Arab nation and only the second to be held in Asia after World Cup 2002, which was hosted in Japan and South Korea. This will also be the first time that the event will take place this late during the year, due to the extreme summer climate in Qatar. France is the reigning champion from the previous World Cup in 2018, in which they triumphed over Croatia in the final with a score of 4-2, claiming their second World Cup title. Italy would have also been one of the favorites, having won the European Championships (EURO) 2020 just last year in 2021 after the EURO was postponed by one year due to the coronavirus (COVID-19) pandemic. However, the Azzurri did not manage to qualify for this World Cup, marking the second time in a row that the team has not qualified for the event and the third time in Italy's history.

Qatar is a peninsula in the Persian Gulf with its sole border to Saudi Arabia in the south and a population of roughly three million people. Eight stadiums will host this year's World Cup matches, mostly located towards the eastern coast of the 11.6 thousand square kilometer (or 4.5 thousand square mile) large peninsula. Six stadiums have a capacity of roughly 40 thousand spectators, the Al Bayt Stadium holds around 60 thousand, and the Lusail Stadium can house 80 thousand spectators. The Al Bayt Stadium will host the opening match between Qatar and Ecuador on November 21. The Lusail Stadium, also known as the Lusail Iconic Stadium, will host the final of the tournament.

After Qatar won the bid for the rights to host the World Cup 2022 back in December 2010, accusations were made of corruption, bribery, and cheating by the Qatar bid committee to obtain these rights. An internal investigation by FIFA was launched, but in its final report, it was concluded that there was no wrongdoing by Qatar. The country has subsequently faced intense criticism due to its treatment of migrant workers in the construction of the stadiums ahead of the tournament.

Ticket prices have increased significantly in the higher categories, with Category 1 tickets for the final match costing 5,850 Qatari riyal, which converts to roughly 1,607 U.S. dollars. This marks an increase of 46 percent from the 1,100 U.S. dollars at the previous World Cup in Russia. The cheapest tickets are Category 4 tickets. As is customary during a World Cup, many of these tickets are reserved for local residents to experience the tournament alongside fans visiting from around the globe. For group matches, Category 4 tickets sell for a more reasonable 11 U.S. dollars. Ticket prices for a team-specific match series range from 227 U.S. dollars for three Category 3 group matches to 4,754 U.S. dollars for seven Category 1 tickets, including the opening match, the quarter-final, semi-final and final match.

It was suggested, and taken into serious consideration, to increase the number of teams competing in Qatar 2022 from 32 to 48. However, it was ultimately decided to keep the number of participating teams at 32, with an expansion to 48 nations starting at the next World Cup in 2026, jointly hosted in Canada, the United States, and Mexico. This final World Cup featuring 32 teams is set up in eight groups from Group A to Group H, containing four teams each. After a group match phase, the tournament enters a knockout round of 16 phase, starting on December 3. This then results in the quarter-finals on December 9 and, ultimately, the final on December 18.


England have the star squad, but are France favorites?

After Wales won against Ukraine and completed the last remaining regular qualifying path to secure their first World Cup qualification in 64 years, Australia and Costa Rica were the last two teams to qualify by winning intercontinental playoff matches, completing the roster for this World Cup. England's squad boasts the highest market value at approximately 1.32 billion euros, followed by France at 1.08 billion euros. The highest market value player taking part in the tournament is Kylian Mbappé of France, who scored a goal in the final four years ago to help secure France the title, as well as receiving the Best Young Player Award for that tournament. Mbappé, who plays his club soccer for Paris-Saint Germain, is currently valued at 160 million euros. On the other end of the spectrum, Qatar is entering its first World Cup by automatically qualifying as tournament host. As well as simply being a far smaller country in comparison to most, the hosts' squad is also ranked lowest in market value overall, at round about 14 million euros. Akram Afif is their leading star on the left wing, with his market value coming in at four million euros.

Effects of the Russian invasion of Ukraine

After the Russian invasion of Ukraine on February 24, 2022, the national teams of Czechia, Poland, and Sweden, who were due to face Russia in the UEFA play-offs to qualify for the World Cup, announced their unwillingness to play any matches on Russian territory. Just three days later, FIFA issued several sanctions around Russia's participation, followed one day later by a suspension of Russia from international competitions until further notice.
This text provides general information. Statista assumes no liability for the information given being complete or correct. Due to varying update cycles, statistics can display more up-to-date data than referenced in the text.
Published by Statista Research Department, Nov 25, 2022

Market value of squads at the World Cup 2022 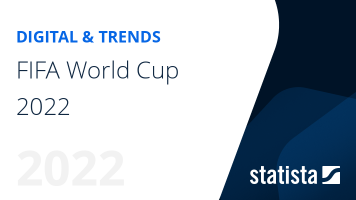 The most important key figures provide you with a compact summary of the topic of "2022 FIFA World Cup" and take you straight to the corresponding statistics.