Published by Statista Research Department, Jun 8, 2022
The International Federation of Association Football (FIFA) is the international governing body of association football which was founded in 1904 and is headquartered in Zürich, Switzerland. It was initially created to oversee international competition among eight national associations in Europe, but it now comprises 211 national associations from across the world. There are six confederations recognized by FIFA which oversee the game on the organization’s behalf in the different continents and regions of the world. The administrative body for association football in Europe and part of Asia is UEFA. In 2021, FIFA had revenues of over 766 million U.S. dollars, over half of which came from television, marketing and licensing rights.

FIFA is responsible for the organization of football’s major international tournaments, the most notable of which is the FIFA World Cup. The men’s inaugural tournament was held in 1930, whilst the Women’s World Cup commenced in 1991. Brazil is the most successful team in the history of the men’s competition as it has lifted the trophy a total of five times, most recently at the 2002 FIFA World Cup held in Korea and Japan. Italy and Germany have both won the title four times. France won the latest edition of the tournament in held in Russia in 2018. The all-time leading goal scorer in the World Cup finals is Germany’s Miroslav Klose, who scored a total of 16 goals across 4 tournaments. He scored his sixteenth and record-breaking goal in Germany's 7-1 semi-final victory over Brazil at the 2014 World Cup. The World Cup is a very lucrative tournament for FIFA and television broadcasting rights for the tournament topped 600 million U.S. dollars in 2014. Many fans also watch the matches live in the stadiums and a total of over 3.03 million spectators saw live games during the 2018 World Cup.

As well as holding a World Cup at national level, FIFA has organized the Club World Cup since 2000. This competition involves seven teams who mainly qualify by winning their continental tournaments, such as the European UEFA Champions League or the North American CONCACAF Champions League. Real Madrid is the most successful team in the history of the tournament with four titles, followed by FC Barcelona with three titles.

Each year FIFA also awards the title of FIFA Ballon d’Or to the top men’s and women’s players of the season. The Argentinean Lionel Messi and Cristiano Ronaldo top the list of all-time Ballon d’Or winners, as both have won the award five times each. The trophy is awarded based on the votes from national team coaches and captains, as well as journalists from around the world. The annual Ballon d’Or ceremony also recognizes team and international achievements, as well as giving the FIFA Puskás award to the goal voted by fans as the most aesthetically significant of the year.

In the following 6 chapters, you will quickly find the 35 most important statistics relating to "FIFA".

The most important key figures provide you with a compact summary of the topic of "FIFA" and take you straight to the corresponding statistics.

Soccer in the U.S. 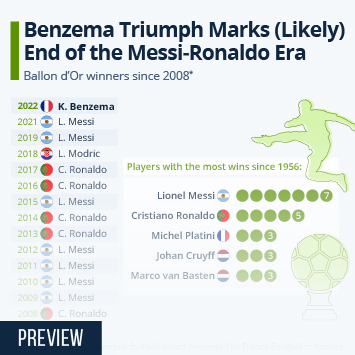 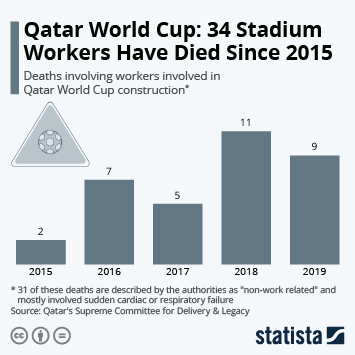