With more than one million footballers of all ages registered in the Royal Spanish Football Federation (RFEF) in 2020, soccer —or fútbol for Spanish speakers— was the most practiced sport in Spain that year. Soccer has a long tradition in the country, with its history dating back to the beginning of the 19th century and its first official club founded in Huelva in 1889. Nowadays, there are approximately 30 thousand officially recognized soccer clubs in the European country.

How is the Spanish professional soccer organized?

Spain’s top male soccer league is worldwide known as La Liga, though officially it carries its main sponsor’s name: Banco Santander. The second-tier men’s division is called ‘La Liga Smarkbank’, while the professional women’s soccer league is known as Primera Iberdrola. These three divisions are run by the Liga Nacional de Fútbol Profesional (LNFP), which is part of the RFEF.

The LNFP is also simply referred to as La Liga and was founded in 1984. Since then, the association is responsible for the organization of professional soccer tournaments in the country. In the last seasons, La Liga’s annual revenue has been close to two billion euros, even during the season most highly affected by the coronavirus (COVID-19) pandemic. This development might be partly explained by the fact that most of that revenue is generated by the transfer of broadcasting rights, while the losses of ticketing revenue were mostly carried by the clubs.

Home to the first and second most valuable soccer club brands worldwide —Real Madrid and Barcelona— La Liga ranks among the top five men’s soccer leagues, which are also known as the ‘Big Five’. In 2021, the Spanish league was the second most valuable soccer brand on the continent, which in turn constituted the world’s largest soccer market, with a size above 25 billion euros.

Spain’s place among the major soccer arenas in the world has been gained throughout the years of successes at club level. For instance, in both the history of the UEFA Champions League and the UEFA Europa League, the rankings of titles are led by clubs from that country. In the case of FIFA World Cups, the Spanish men’s national soccer team managed to win its first and, so far, only title in 2010. This made Spain one of only eight nations to have ever won the world title, sharing the last position with England until the team try its hand again at the next World Cup in Qatar in 2022.
This text provides general information. Statista assumes no liability for the information given being complete or correct. Due to varying update cycles, statistics can display more up-to-date data than referenced in the text.

Most valuable footballers of the Spanish national team 2022 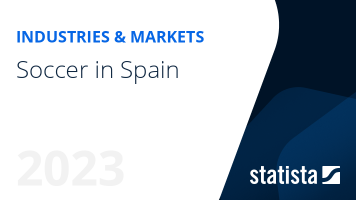 The most important key figures provide you with a compact summary of the topic of "Soccer in Spain" and take you straight to the corresponding statistics.