Soccer in the U.S. - Statistics & Facts

Published by
David Lange,
Nov 16, 2020
Soccer – football outside of the United States – is one of the most popular sports in the world. The sport’s origins trace back to the second half of the 19th century in Britain. Prevalent in Europe and South America, the sport has enjoyed a growing popularity among Americans. More teenagers are playing soccer in the U.S. than ever before. The number of participants in U.S. high school soccer programs has recorded an all-time high in the 2018/19 season, with over 850 thousand boys and girls playing the sport across the country.
The women’s national soccer team performance in the last decade is one of the reasons the sport’s popularity has risen in the U.S. The women's national soccer team is currently considered the best women’s soccer team in the world. The men’s national team, on the other hand, is not as successful as the women’s team, ranking mid tier in FIFA’s world ranking.

Atlanta United and LA Galaxy are two of the most prestigious teams in the MLS. They lead the league in revenue with 68 million U.S. dollars and 64 million U.S. dollars respectively, as well as in team value. LA Galaxy is the only team with five MLS Cup trophies. Players such as David Beckham and Landon Donovan, considered one of the best American soccer players of all time, were part of the LA Galaxy roster in the past.

In the following 5 chapters, you will quickly find the 33 most important statistics relating to "Soccer in the U.S.".

The most important key figures provide you with a compact summary of the topic of "Soccer in the U.S." and take you straight to the corresponding statistics. 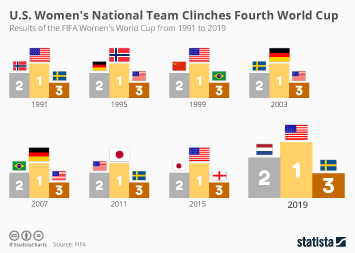