Published by
Justina Alexandra Sava,
Sep 21, 2022
Telecommunications is one of the industries that has irreversibly changed the world by allowing individuals to stay connected. After a small drop in revenue caused by the coronavirus (COVID-19) pandemic in 2020, the telecommunications sector in Spain seems to be back on its ascending track. In 2021, the Spanish telco sector generated revenues worth 34.4 billion euros, representing one of the highest values recorded over the past ten years. Moreover, mobile telephony services registered their first positive annual growth in revenue since 2007, valued at nearly seven percent.
Naturally, the COVID-19 pandemic precipitated digital transformation processes that changed the traditional telecom sector in Spain from a simple voice-based ecosystem to a much smarter network. Consequently, it comes as no surprise that 2021 marked the year with the highest investments in the Spanish telecommunication sector over the past two decades.

The chairman and CEO of Telefónica S.A., José María Álvarez-Pallete López, made a rather peculiar – yet realistic comparison during one of his many interviews, by associating the Spanish telco industry with the movie, The curious case of Benjamin Button. The CEO stated that while the telco sector was born old-fashioned, it is becoming younger and younger by day, while consumers are becoming older.
In 2021, the number of mobile connections in Spain peaked at 56.8 million, out of which 84 percent of them were postpaid telephone lines. Moreover, Spain is also one of the leading European countries in terms of FFTH connections. As of June 2022, there were 13.2 million Fiber-to-the-Home connections in the country, up from just 9.5 million in 2019. This translates into FTTH internet coverage of households varying from 66.25 percent to 88.42 percent, according to the municipality size. Only municipalities that had below 1,000 inhabitants had a FFTH coverage under 50 percent. The most important strategies in Spain concerning mobile broadband mainly involve digital connectivity and 5G rollout. By 2025, the cost of 5G enhanced mobile deployment in Spain was estimated at 8.6 billion U.S. dollars, with the purpose of ensuring fast network coverage, as well as 100 percent coverage of the radio spectrum for 5G.

A base transceiver station (BTS) is a fixed radio transceiver that has the purpose of connecting mobile devices to a network. Simply put, it sends and receives radio signals to mobile devices, then converts them to digital signals. In 2021, there were over 182 BTS in Spain, out of which nearly 40 thousand were 4G, and nine thousand were 5G. Although the amount of 5G BTS may seem rather small at first glance, the 5G infrastructure has had a rapid development over the past two years, with the number of 5G BTS almost doubling in 2021 compared to 2020.
4G mobile services have exceeded a coverage of 99 percent in Spain since 2019. The 4G/LTE full coverage in Spain is the result of almost a decade of work and investments in the Spanish telecommunications infrastructure, as Spain implemented 4G in 2013. However, 5G coverage in Spain increased from just 9.4 percent in 2019, to 82.3 percent in 2021.

In the following 7 chapters, you will quickly find the 40 most important statistics relating to "Telecommunications in Spain". 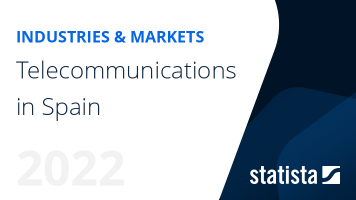 The most important key figures provide you with a compact summary of the topic of "Telecommunications in Spain" and take you straight to the corresponding statistics.