Published by
Justina Alexandra Sava,
Aug 3, 2022
The Spanish smartphone market was not spared from the negative effects of the coronavirus (COVID-19) pandemic in 2020, facing considerable decreases in the number of units shipped in the region, as well as a drop in market revenue. However, the Spanish smartphone market has experienced a great recovery, increasing its revenue by nearly 20 percent in 2021. Moreover, forecasts indicate that the market will continue to increase, exceeding 3.6 billion U.S. dollars in revenue by 2023.

The ubiquity of smartphones in Spanish households

Smartphones have become more than just personal communication devices. The number of smartphone users in Spain is expected to surpass 40 million starting 2023. The growing number and variety of mobile devices and smartphone applications testify to their fundamental importance in our daily life. Some of the most used smartphone apps in the country include mobile browsers, email platforms, social networks, and messaging apps. The development of modern technologies and increasing competition continue to drive the smartphone market forward. It comes as no surprise that in 2021, around 97 percent of Spanish households owned at least one mobile phone – making these devices an indispensable staple of the Spanish household.

As of June 2022, the Chinese smartphone manufacturer Xiaomi remained the most popular smartphone brand in Spain, with a market share of 28.5 percent, placing the company ahead of the Korean tech giant, Samsung, as well as of Apple. However, in terms of smartphone models, Samsung Galaxy A12 and Redmi Note 9 were the bestselling Android smartphones in Spain. As for the most used operating system in the country, it is fair to state that Apple’s iOS and Android control the entire market, with Android accounting for more than 80 percent of the operating systems for smartphones.
The most important mobile carriers are Telefonica – operating in Spain as Movistar – Vodafone, Orange and Jazztel, providing services to more than 60 percent of Spanish smartphone users.

As of May 2022, the monthly mobile penetration rate in Spain exceeded 119 mobile phone users per 100 inhabitants. Several surveys indicated that approximately 20 percent of mobile phone users spent more than four hours per day on their smartphones.
The increase in smartphone consumption and revenue has also been in line with the rollout of 5G technologies. In 2021, 5G connections accounted for more than one third of all mobile connections in Spain. Future tech developments will continue to have an impact on the use of smartphones and network technologies - not only in Spain, but worldwide.

In the following 6 chapters, you will quickly find the 28 most important statistics relating to "Smartphones in Spain". 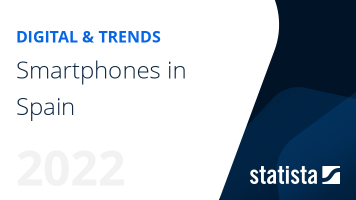 The most important key figures provide you with a compact summary of the topic of "Smartphones in Spain" and take you straight to the corresponding statistics.