Skip to main content
53k
74.6k
87k
88.9k
Yesterday Facebook announced that it would introduce its virtual reality world in closed beta in 2020. The multiplayer VR interface will enable people to create games, socialize with friends, and explore the user-generated world.

Facebook began its venture into virtual reality in 2015 when it bought Oculus. That move seems to be paying off for the company. The market is now, more than ever, dominated by big players Sony (PlayStation VR) and Facebook (Oculus Rift). This year both companies are forecasted to account for nearly 70 percent of global VR device shipments, rising from about 63 percent last year.

Facebook is projected to grow its share of the global device shipment market by ten percentage points this year. Over that same period, Sony is expected to lose market share. Virtual reality keeps the possibility that Facebook can further its ad business, allowing advertisers to post VR ads and engage with users in a new way.

Overall, according to Trend Force, global headset shipments grew 25 percent between 2017 and 2018, reaching 4.65 million units and are expected to grow by 29 percent in the current year. Despite growing interest in augmented reality, virtual reality still accounts for most of the shipments in the AR/VR market.

As the social media giant attempts to revitalize a stalling user-based, plague by distrust from the general public, virtual reality may be the ticket to breathing new life into their ad-based business. 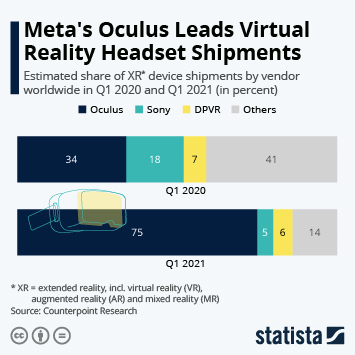 This chart shows the estimated share of VR device shipments by vendor worldwide in 2018 and 2019.