88.9k
Reddit, the self-proclaimed "front page of the internet", is considering an initial public offering, the company’s CEO Steve Huffman reportedly said at an event earlier this week. Currently valued at $1.8 billion, Reddit is among the ten most popular websites in the world and the fourth most popular one in the United States, trailing only Google, YouTube and Facebook, according to Alexa.

Reddit has been entangled in a fair bit of controversy over the past few years, as it was repeatedly accused of providing a platform for hate speech, hacked celebrity photos and even child pornography. Earlier this year, Reddit reacted to the ongoing criticism by abandoning its laissez fair attitude with respect to its users’ posts and cracking down on extreme, violent or otherwise controversial content.

Reddit is organized into many forums dedicated to a particular topic known as subreddits. Over the years, the number of subreddits has skyrocketed and you’ll be hard-pressed to find a topic that isn’t discussed on Reddit these days. As our chart, based on data from Reddit Metrics, illustrates, there are nearly 1.2 million subreddits today, up from little more than 10,000 in 2008. 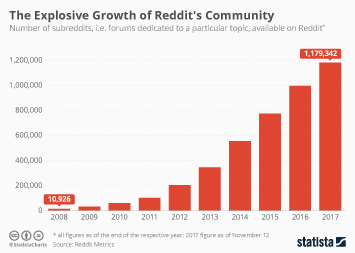 This chart shows the number of subreddits, i.e. forums dedicated to a particular topic, available on Reddit.