88.9k
On April 23 every year, German breweries traditionally celebrate "German Beer Day". It was on this day in 1516 that the country's famous "Reinheitsgebot" or "beer purity law" was enacted. The law, which is still applied today, means that only specific ingredients can be used in beer, specifically water, hops, yeast and barley.

Our company has its headquarters in Hamburg, Germany, so naturally we had to mark the day by creating a beautiful infographic. It shows how in Germany, the number of breweries has risen steadily in recent years despite the fact that less beer is being consumed. Back in 2000, 98.8 million hectoliters were consumed and last year, that had fallen to 77.2 million.

Nevertheless, German beer is a mega-hit abroad. In 1995, only 6.6 million hectoliters was exported by last year, that had gone up to 16.2 million. The Italians are the biggest fans, importing €260 million worth of pilsner, dunkeles, weizen, etc while the Chinese imported €129 million, followed by the U.S. with €87.8 million. 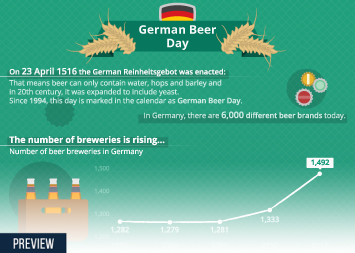 This chart shows some key facts behind the German beer industry.