88.9k
Despite vocal opposition from industry voices, the Department of Homeland Security filed a long-expected proposal to remove the International Entrepreneur Rule, which was designed in the last days of the Obama era and allows immigrants who (co-)found a company in the United States to remain in the country for two and a half years (with a possible extension of the same length) as long as certain criteria are met.

Like the revisal of the H-1B visa program for highly skilled foreign workers, the DHS’s plan to rescind the International Entrepreneur Rule is part of the Trump administration’s broader crackdown on what it sees as abuse of immigration loopholes. Closing those loopholes is supposed to protect American workers, but many experts think that rescinding the International Entrepreneur Rule in particular will ultimately do the opposite. “Immigrant entrepreneurs are job makers, not job takers”, Steven Case, a prominent venture capital investor and co-founder of AOL, said last year, when the Department of Homeland Security delayed the effective date of the rule from July 2017 to March 2018 and announced that it would ultimately seek to rescind it.

In fact, immigrant entrepreneurs have played a major role in the American startup scene and continue to do so. According to a 2016 report by the National Foundation for American Policy, 44 of 87 startups valued at more than $1 billion as of January 2016 were (co-)founded by immigrants, creating an average of 760 jobs per company in the process. The following chart shows the top countries of origin for immigrant founders of unicorn startups. 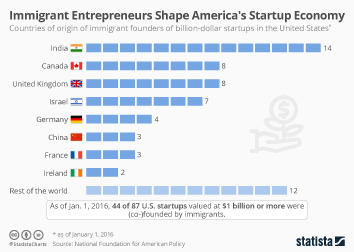 This chart shows the countries of origion of immigrant founders of billion-dollar startups in the United States.